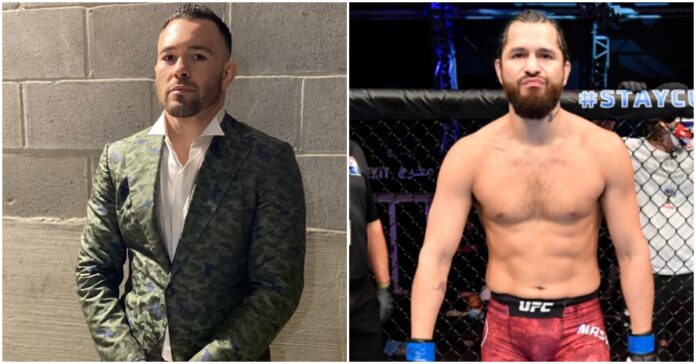 Colby Covington claims to know the specific injury that led to Jorge Masvidal withdrawing from a fight for the first time in his long MMA career.

‘Gamebred’ was expected to face off against Leon Edwards at UFC 269 on December 11 before he recently pulled out of the bout due to an undisclosed injury.

During a recent appearance on The MMA Hour, Masvidal revealed a timeline for his potential return to action but refused to reveal the specific injury he has suffered.

“(It was) a good injury,” Masvidal said. “A good injury happened. I don’t think I’ve ever signed a bout agreement and pulled out ever. In my whole history in the UFC, this is my first time. I don’t want to discuss the actual injury that I got. It should impact me for five to six weeks. The reason is that I never discuss my injuries online is, why? Why am I going to give info out on myself?”

Colby Covington Has The Inside Scoop On Jorge Masvidal’s Injury

“I’ll tell you the truth of what happened with Jorge Masvidal for real. I still have people at his gym that still love me, and I’m the people’s champ for a reason. So, I get the insider scoop on everything,” Covington told Submission Radio. “So, that fragile dude, Street Judas Jorge Masvidal, he broke his ribs. He fractured his ribs last Saturday in training, and yeah, he’s fragile and he had to pull out of the fight. It’s too bad that people still love me over at his gym more than they even love him.”

“That’s facts. I’m telling you guys the truth,” Covington added. “He went to the gym to train last Saturday, doing some sparring – not last Saturday, but the Saturday before. Like, yeah, eight days ago. And, he went to sparring at the gym and gets his ribs fractured, leaves the gym crying and, you know, goes to the doctor and gets the x-ray, and they determine it’s fractured ribs.

“He’s a fragile little bitch. He’s a brittle a little bitch. He tried to talk about me being fragile. That’s the most fragilest (sic) guy on the fucking roster. That guy’s a complete little joke. And it’s pretty funny, I think he’s finding out that he’s a nobody, he’s a bum, and that’s the reason people are telling me what’s going on with him. He tried to keep it a secret, He didn’t want to tell the media, he didn’t want people to know, but now they know because of Colby Chaos Covington.”

Do you believe Colby Covington? Did fractured ribs force Jorge Masvidal off UFC 269?