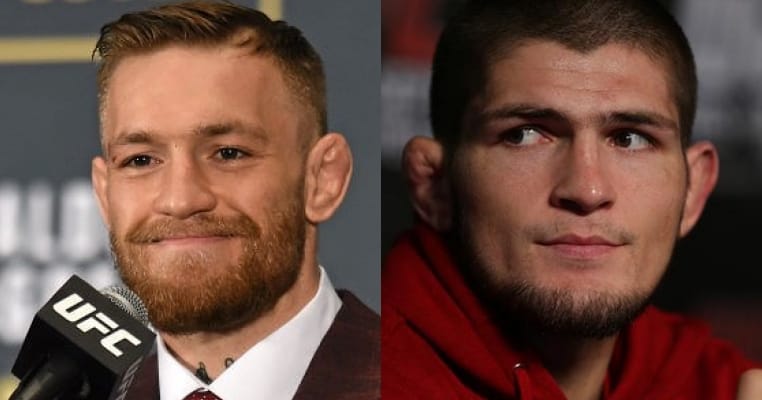 With Nate Diaz, Tyron Woodley, and even Floyd Mayweather heading a long list of candidates for Conor McGregor’s opponent after his lightweight title victory over Eddie Alvarez at UFC 205, it seems that top-ranked lightweight Khabib Nurmagomedov may get left in the dark.

The dominant grappler has been more than vocal about finally getting the title shot he feels is long overdue, threatening to leave the UFC if he is not given the next opportunity.

And it’s hard to argue with the dominant wrestler following his own vicious destruction of Michael ‘The Menace’ Johnson at UFC 205. The victory extended his perfect record to 24-0, meaning a shot at gold would seem to be inevitable, yet McGregor hasn’t been so agreeable.

READ:  Francis Ngannou Accuses The UFC Of Trying To ‘Sabotage’ Him

Citing “The Eagle’s” frequent pulling out of fights due to injury, “Notorious” said he’s not interested in facing the Dagestan-born lightweight. That has lead to Khabib’s American Kickboxing Academy (AKA) coach Javier Mendez to offer his belief that McGregor is simply ducking his top lightweight:

“Yes, 100 percent, he is ducking Khabib,” Mendez told ESPN.com. “I know that from the words he is saying. ‘He doesn’t fight enough for my taste’? Give me a break.”

Mendez elaborated on his stance, noting that a third fight with rival Diaz is understandable, but there’s no reason to put Nurmagomedov down in the process, especially if he isn’t willing to fight him:

“”You can say, ‘Hey, I want to fight Nate Diaz a third time.’ Fine. Say that. But don’t try to put my guy down because you are trying to avoid him. Don’t belittle my guy. That’s bulls—.”

The AKA head man believed “Notorious” was beyond ducking anyone when he faced Chad Mendes on short notice at July 2015’s UFC 189, but now is starting to think he’s gone back on that trend, as “The Eagle” would give his toughest test in the division:

“When he fought Chad Mendes, I thought it proved he wasn’t ducking anybody,” Mendez said. “But now he’s doing this and I’m thinking he’s trying to avoid Khabib. I think Khabib, [lightweight contenders] Nate Diaz and Tony Ferguson all give Conor a hell of a fight — but the guy who gives him the worst time, by far, is Khabib. He’s the strongest grappler in the division.”

Finally, Mendez cleared up Khabib’s stance overall, calling “The Eagle’s” drive to fight McGregor simply about being the best, not getting a fight with MMA’s biggest star:

“That’s what he has said this whole time,” Mendez said. “And it’s not about fighting Conor. He doesn’t care if he fights Conor. He wants to fight for the title. He has no beef with any fighter out there. He wants the title to prove he’s the best, and he wants to defend it against the best.”