LowKickMMA.com
Home MMA News Chris Weidman: Rockhold & Jacare Have No Chance With Me 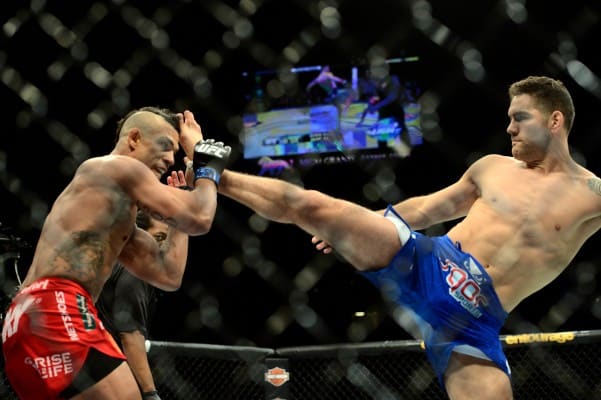 Undefeated middleweight champ Chris Weidman may have successfully defended his belt with a rousing first round finish of Vitor Belfort in the co-main event of last weekend’s (May 23, 2015) UFC 187 from Las Vegas, but his work is far, far from over.

Weidman now faces the daunting task of facing the top level of ‘new era’ middleweights after consecutively demolishing three Brazilian legends in Anderson Silva, Lyoto Machida, and Belfort. It’s still up in the air as to whether he’ll face no. 1-ranked Luke Rockhold or no. 2 Ronaldo ‘Jacare’ Souza, but true to form, Weidman doesn’t seem all that worried about the challenge that either streaking fighter presents.

Speaking up during this week’s edition of The MMA Hour, Weidman said that he doesn’t foresee any difficulty in running through both elite fighters. He also picked Jacare to be more dangerous than Rockhold, just not as technically sound:

“I would expect a tough fighter, but I’m running right through any of these guys. Rockhold]’s well rounded, but he’s not great anywhere. He’s not the best striker I’ve ever fought; he’s not the best jiu-jitsu guy I ever fought. Jacare brings a different element, he’s really good on the ground and he’s probably more dangerous on the feet than Rockhold. Rockhold is well rounded and keeps a good solid pace going throughout the whole fight. They are two completely different fighters. If I was to say who was more dangerous, it would probably be Jacare, but there are probably more holes in his game than Rockhold.”

Weidman then voiced his opinion that he doesn’t have a preference between the two, because he’s confident neither really has a realistic chance of beating him. The champ is glad that they both bring a champion’s mentality and are looking to take part in big fights like he is:

As for when he’ll fight next, Weidman, who’s unfortunately known for his lengthy history of injuries that all but prevents quick turnarounds for him, said he’s going to enjoy the summer with his family for now. But after only earning a 45-day medical suspension for his fight with ‘The Phenom,’ he then wants to get back in the Octagon to continue separating himself from the crowded middleweight crop:

“I want to return as soon as possible. Fighting in May was great, so now I have June, July, I’d like to enjoy the summer a little bit with my family. Other than that, I want to keep on going. I want to separate myself from these guys. Every time you get done with a fight, there’s another guy. That excites me, to let these guys know the truth.”