LowKickMMA.com
Home MMA News Chad Mendes: We Made Duane, I Don’t Know What He’s Talking About 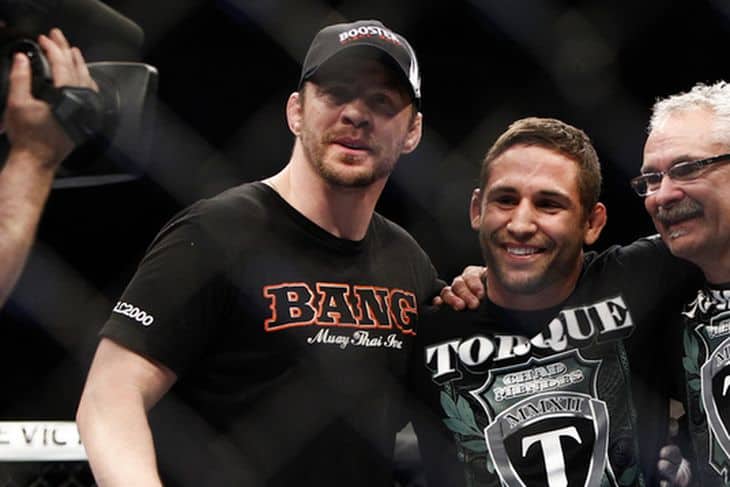 There seems to be some ongoing beef lately between one of the most highly-touted camps in mixed martial arts in Team Alpha Male, and now well-respected coach Duane “Bang” Ludwig.

Ludwig is a former coach of Team Alpha Male, and it seemed as if under his instruction, the fighters there rose to a whole new level. “Bang” even gets a lot of credit for turning current bantamweight champion TJ Dillashaw into the fighter he is today. Dillashaw still trains with Ludwig, despite the coach leaving Team Alpha Male to start his own gym.

In recent weeks, however, Ludwig has made some comments that haven’t sat well with the men over at Team Alpha Male. “Bang” stated that Dillashaw is the one who actually wants to be a champion, also mentioning that if Chad Mendes, who recently lost an interim title bout to Conor McGregor, trained with Ludwig, that he would be a champion as well.

After some of these comments, it seems as if the team and Mendes individually are fed up, as “Money” fired back on yesterday’s (August 4, 2015) edition of the MMA Hour. Mendes said that Ludwig was only with the team for a short time, and during that time, the fighters would have won their fights without him:

“I don’t know what the hell Duane is talking about,” Mendes said. “I’m tired of hearing about Duane and him ruling our team. Duane came here to Team Alpha Male for a short amount of time, and Duane did what he did, but I’d say 95-percent of our wins when he was here we would’ve won anyway.”

Mendes admits that Ludwig brought a new style to the team, but the former title challenger says that that the team is so strong that they can easily pick up new styles, also claiming that Team Alpha Male made “Bang”:

“Duane was the type of guy who brought a new style to our team, but we have such a unique team, everybody is such high-level athletes that anybody can come to this team with a new style, and we’re going to pick it up, we’re going to learn it and we’re going to use it in fights. So we made Duane. We put Duane on the map. Before that, Duane was a fighter who fought in the UFC who most people didn’t even know about.”

Well, it definitely seems as if Mendes has spoke his mind, and I’d have to think that many of the other members on the team feel the same. Did Ludwig make Team Alpha Male, or did the team make Ludwig?