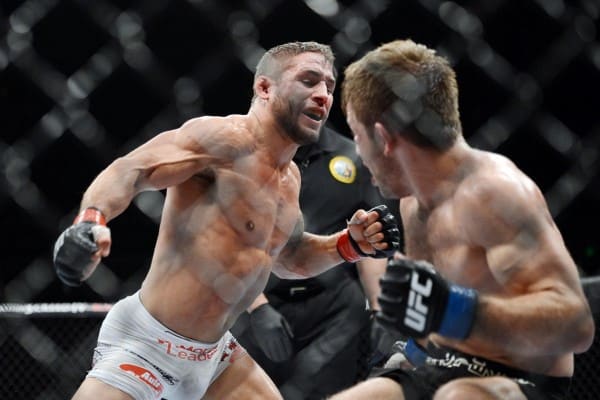 April 4’s upcoming UFC Fight Night 63 from Fairfax, Virginia, is quickly filling up with some potentially action-packed bouts, none more so than the just-announced featherweight headliner between No. 1-ranked Chad “Money” Mendes and No. 3 Ricardo Lamas.

The pivotal bout will put the winner close to title contention once again. Mendes most recently lost his rematch with champion Jose Aldo at last October’s UFC 179 in a “Fight of the Year” candidate for 2014. Lamas won his latest bout with a first round submission over the previously streaking Dennis Bermudez at November 2014’s UFC 180 that put him back into the win column after a decision loss to Aldo at February 2014’s UFC 169 from New Jersey.

The co-main event for the card was announced as well, with dangerous lightweight competitor Bobby Green and Jorge Masvidal squaring off in a pivotal affair for both men’s careers.

Another lightweight fight between Michael Chiesa and Mitch Clarke was also added to the card, joining the already scheduled Dustin Poirier vs. Carlos Diego Ferreira fight to make a trio of lightweight bouts on the card’s current docket.

Here is a full rundown of the UFC Fight Night 63 schedule right now: