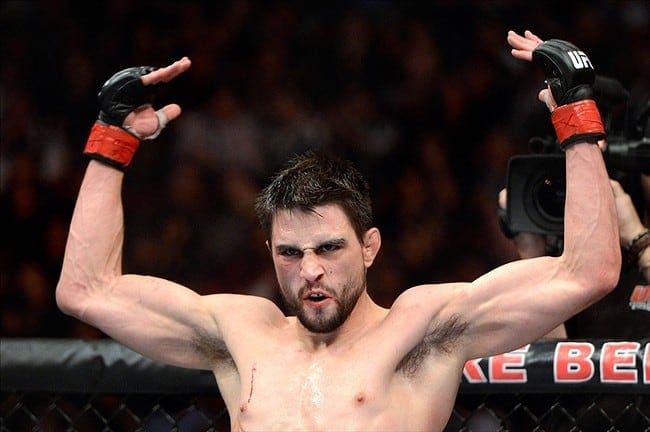 After a long 14-month layoff due to knee injury, the “Natural Born Killer” Carlos Condit finally returned to action last night (May 30, 2015) in Brazil, scoring a brutal second-round TKO (via doctor’s stoppage) over former title challenger and No. 12-ranked Thiago “Pitbull” Alves.

Still sitting at No. 4 in the 170-pound division despite being out of action for some time, Condit knows exactly what he wants next. Speaking at the post-fight press conference, the “Natural Born Killer” said that he’s focused on the title, and wants to fight whoever may have it:

“I want whoever has the title in a couple months,” Condit said. “Whether it’s Rory (MacDonald) or whether it’s Robbie Lawler, I want that guy.”

Regarding last night’s fight, Condit admitted that he didn’t exactly know what happened when the doctor stopped it, but he did feel Alves’ nose break when he hit the “Pitbull” with numerous elbows. Now back on track, the Jackson-Winklejohn product feels as if his impressive performance speaks for itself:

“I didn’t exactly know what happened, but I felt (his nose break) on my elbow,” Condit said. “I knew that he was hurt. I hurt him with the first rising elbow, then hurt him with the spinning back elbow. I could just feel the fight drained out of him after I hit him that first time.

“I think that my performance speaks for itself,” Condit added. “I came out and I got the finish against Thiago Alves, who’s one of the top strikers in the division.”

With Johny Hendricks, who beat Condit back at UFC 158 via unanimous decision, and Tyron Woodley, who handed Condit his last loss at UFC 171, sitting above the “Natural Born Killer” in the rankings, it may be hard for Condit to jump ship and earn a title shot before either of those men. However, many feel as if Condit actually got the better of Hendricks, and although he was most likely losing his bout with Woodley, it ultimately ended with a Condit injury. It may make sense for “The Natural Born Killer” to rematch either of these two in a title eliminator of sorts.

Who should Condit face next?