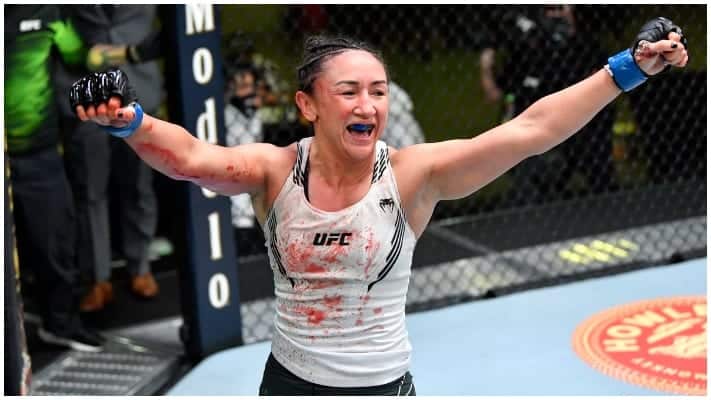 Carla Esparza was offered top contender instead of a title shot after her last win.

Inaugural UFC strawweight champion Esparza has been working her way back to the title since she lost it in 2015. The former champion has put together a five-fight win streak with wins over Virna Jandiroba, Michelle Waterson, Alexa Grasso, and Marina Rodriguez.

Most recently, she faced surging contender Yan Xiaonan in the co-main event of UFC Fight Night: Font vs. Garbrandt. Esparza dominated and ended up finishing the Chinese fighter in the second round. It was the first time she had finished an opponent since winning the title. The win would earn her a Performance of the Night bonus.

Many thought the win over Xiaonan would earn Esparza a title shot and a rematch with Rose Namajunas. However, it was announced that Namajunas would rematch Zhang Weili instead.

In an interview with MMA Junkie on Monday, Esparza revealed she was offered another contender instead of a title shot.

“I was offered with the fight with Mackenzie [Dern]. They offered me the fight like very soon after I got home from my last fight, so I was like, ‘oh.’  So, you know, it is seeming like a big possibility that I’m not going to get the rematch with Rose,” Esparza said.

Esparza was worried that if Dern were to get a win, it would throw another wrench into the crowded strawweight division. But, instead, Dern would end up losing to Rodriguez this past weekend.

No matter the obstacles and roadblocks, “Cookie Monster” believes she is the next in line.

“I’m going to know a lot after the fight on Nov. 6. I think whatever happens after that fight is going to be very telling on what happens with my future and my next fight,” Esparza said.

“Of course, I want the title fight. I’ve been fighting for seven years to get back to this point, but I also want to stay active and fight because that’s what I like to do, so hopefully, it goes in a way that makes sense for the UFC to give me the next fight.”