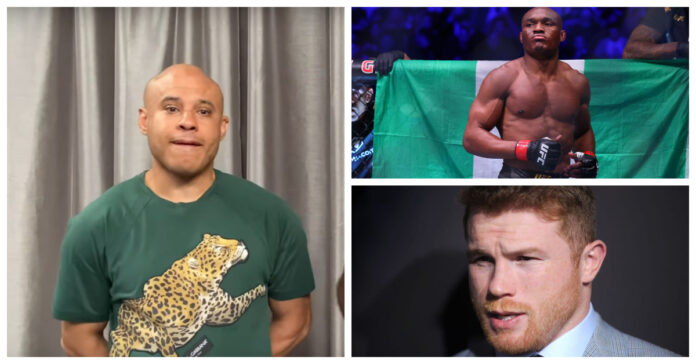 Kamaru Usman‘s manager Ali Abdelaziz believes Canelo Alvarez is not any more special after his loss to Dmitry Bivol.

Canelo Alvarez suffered his first loss in under a decade when he took on Bivol last month. Following the unsuccessful efforts at light-heavyweight, Canelo will move back down to super-middleweight to defend his undisputed title against Gennady Golovkin in a trilogy bout.

While many will still attest to the Mexican boxer’s achievements, Abdelaziz, head of Dominance MMA, believes Canelo’s lost some shine after having a blemish in a bid to move up in weight class. Abdelaziz was calling for a crossover matchup between the reigning UFC Welterweight king Kamaru Usman and Canelo Alvarez but his loss against the Russian has changed things.

In an interview with Menace Tube, Ali Abelaziz spoke about Canelo’s loss to Bivol and stated that Canelo had lost his shine as the pound-for-pound champion after the defeat.

“Canelo has become just a regular guy,” Abdelaziz said. “He’s become just one of the guys. It was the pound-for-pound king against the pound-for-pound king but Canelo, his mystique is gone. “I respect Canelo. I think he blew a great opportunity for him. The oddsmakers will probably make it 8/1 against Kamaru but I think Kamaru has enough balls to go to boxing and we know Canelo will never have enough balls to come to MMA.” (h/t Mirror)

During the build-up to his match against Bivol, the subject of a fight with Usman was rarely brought up. Canelo continued to reiterate his stance of building a legacy before he hands out a big payday to ‘The Nigerian Nightmare’. He has the rest of the year planned with a third fight against Golovkin in September and his UK debut in December.

Usman believes that he has the right skill set to pull off a major upset against one of the greatest boxers. While he has been linked with a long-awaited bout with Leon Edwards, he could also possibly see himself lining up against Conor McGregor.

“Kamaru is good, he’s recovering,” Abdelaziz continued. “He’s taking his time. The UFC has been great about giving him space and not pressuring him to fight. He’s the greatest pound-for-pound fighter I’ve ever seen. He has not stopped training. If people think he’s injured, not training – he’s training every day.”

Do you want to see Canelo Alvarez take on Kamaru Usman?