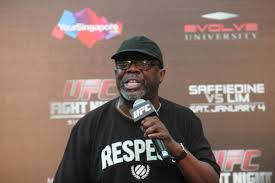 After a rumor surfaced surrounding a supposed argument surrounding a fighter’s weight cut at last Saturday’s UFC 184, longtime site coordinator Burt Watson has confirmed his resignation from the UFC.

Watson, who has been with the promotion for 14 years, stepped down and expressed his gratitude to the UFC on Twitter this morning:

Reports came over the weekend of a confrontation between Watson and another UFC official, but no official reason was given for his hasty departure from his long-held position. There was confirmation of the alleged incident from MMA Junkie’s John Morgan, but Watson did not elaborate on the situation. Many had speculated that the confrontation was about middleweight Mark Munoz, who lost to Roan Carneiro in the event’s featured preliminary bout, but “The Filipino Wrecking Machine” quickly took to his own Twitter account to dispel any such notions:

Just so every1 knows I have utmost respect 4 @BurtWatson4real! He’s a gr8 man & gr8 at what he does! Not sure what every1 is talking about.

With controversy and mystery shrouding Watson’s exit from the UFC, the “babysitter to the stars” will now start a new chapter in his life after being a big part of the UFC for so long. His iconic “We rollllliiiiiiiinnnn” is already missed by fighters evident by the outpouring of shock and support that has immediately followed the news of his resignation.