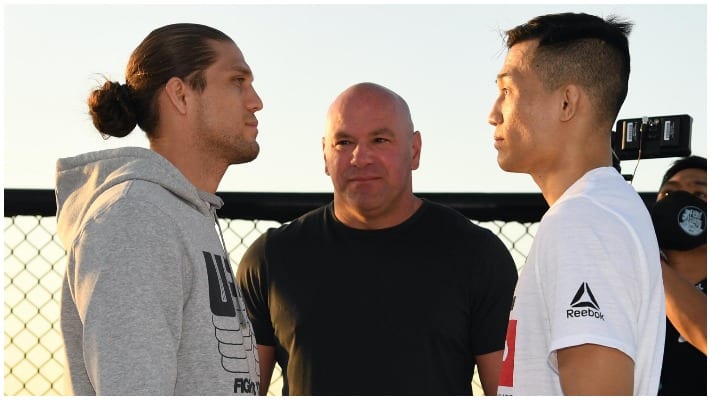 IT’S TIME! The UFC Fight Island 6 main event is finally upon us. Brian Ortega returns to the Octagon for the first time in almost two years to face off against ‘The Korean Zombie’ in the featherweight fight with title implications. Who’ll win? Let’s find out…

Round 1: ‘The Korean Zombie’ leads the dance with big wide hooks that miss. Brian Ortega lands with a heavy leg kick. Both men are being really patient right now. Despite the animosity it’s clear these two fighters respect one another. Ortega lands another leg kick. ‘TKZ’ rush forward and lands a nice one-two straight down the middle. Both fighters land with low leg kicks. Ortega is trying to keep his opponent at range. Each and every time ‘Korean Zombie’ steps in Ortega pops him with something to maintain distance. Ortega is opening up and drops ‘TKZ’ with a overhand. The Korean pops straight back to his feet but that was legit. Ortega goes upstairs with a kick that partially lands. He’s really starting to turn it on at the end of this round. Both men clash and try to throw as they break as the horn sounds to end round one.

Round 2: A really slow start to round two. Ortega lands a low leg kick and the fight suddenly sparks into life. ‘The Korean Zombie’ rushes forward with a flurry of punches. Ortega is covering up well and is blocking most of them but ‘TKZ’ did sneak a few in. Ortega drops down for his first takedown of the bout. ‘TKZ’ does really well to defend it. ‘T-City’ swings an overhand that catches his opponent on the top of his head. Ortega is pressed back against the fence. ‘TKZ’ lands a nice one-two. He quickly follows up with a nice uppercut. ‘The Korean Zombie’ rushes in once again and eats a huge spinning elbow. Ortega drops him and is trying to follow up now for the finish. ‘TKZ’ eats some ground and pound before popping back to his feet. Ortega shows his fight IQ by dropping down to secure the takedown and riding out the rest of round two in top position.

Round 3: Another slow start. ‘TKZ’ still seems to be shaking off those shots from round two – he’s stretching out his jaw right now. Jung is hesitating right now and it’s allowing Ortega to take his time and pick his shots. Ortega goes to the body with a kick. ‘The Korean Zombie’ returns with a right hand over the top. Ortega level changes and fires off a hard straight shot to the body of his opponent. The one-time title challenger is really mixing up his attacks tonight. ‘TKZ’ comes over the top again. Ortega rattles off another low leg kick. He tries to shoot for a takedown. ‘TKZ’ shrugs it off but eats a nice hook on the break and round three lands shortly after.

Round 4: ‘The Korean Zombie’ is pushing forward at the start of round four. He’s likely down three rounds right now. Ortega is content to move back towards the fence but seems to take the middle too. He shoots for a takedown. Ortega pushes him from one side of the Octagon to the other. As he breaks he lands a huge shot that cuts and hurts ‘The Korean Zombie. The blood is pouring into his eye and the referee stops the fight and invites the doctor in to check it out. After a brief look, we are back underway. ‘TKZ’ is really struggling to get anything off tonight. He throws a body kick but it’s caught and Ortega nails him with a big shot. This fight is starting to get away from ‘TKZ’. Ortega ends the round with a deep takedown attempt. It doesn’t come off but he uses the desperation to try to land more big strikes

Round 5: ‘TKZ’ pushes forward at the start of round five. He lands a straight to the body. Ortega hits a low kick. ‘T-City’ keeps grabbing down for the leg and it’s really throwing his opponent off. It’s a complete shut out at this point. Ortega is feeling himself popping off shots that are knocking back the head of ‘The Korean Zombie’. He’s down but ‘TKZ’ keeps pushing forward. However, every time he gets in range he seems a bit shot shy. Ortega certainly isn’t and continues to catch his man coming in. ‘The Korean Zombie’ is having a bit more success towards the end of this round. He’s landed a couple of big strikes but is unable to follow up. Ortega has supreme confidence in his chin and is content to remain in the pocket. The fight ends with both men throwing – Ortega even tried to spin for that elbow again.