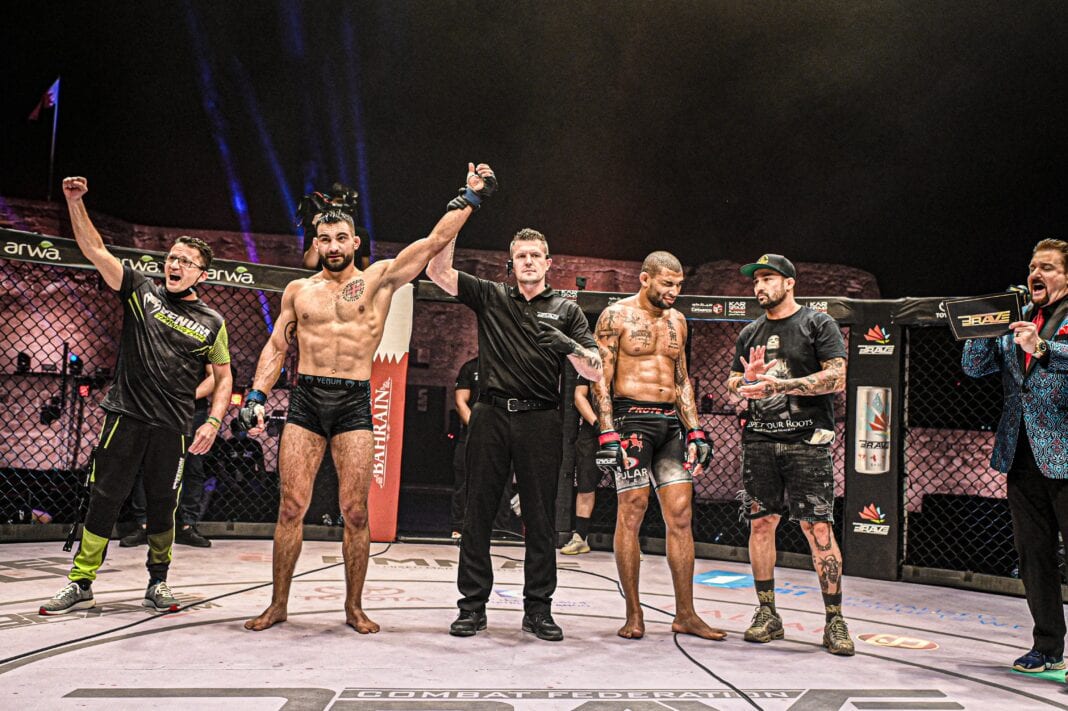 BRAVE CF 49 went down today (Thur. March 25) inside the Arad Fort in the Kingdom of Bahrain. Headlining the 11-bout card was a super lightweight title eliminator between Brazil’s Luan Santiago and France’s Benoit St. Denis.

Santiago was vocal coming into this matchup about how he thought that St. Denis was a tough fighter but lacking experience. The Brazilian came out fast in the opening round but soon found himself on the receiving end of St. Denis’s impressive ground game. After a brief flurry from Santiago, the Frenchman secured the takedown before he went looking for the finish. Santiago survived two rear-naked-choke attempts to make it to the second round.

However, it was here that his luck ran out with St. Denis locking in an arm-triangle choke: forcing Santiago to tap. The win now means that the 25-year-old’s next bout will be against the division’s reigning champion Eldar Eldarov.

“I always wanted to fight Eldar and I hope we can do it as soon as possible. He’s a great champion, but it’s my goal, my life, I will be the next world champion”, St. Denis said in his post-fight interview.

In the co-main event, Jose “Shorty’ Torres booked his ticket to the BRAVE CF Flyweight Grand Prix semi-finals with a hard-fought unanimous decision victory over SBG’s Blaine O’Driscoll. Torres was initially set to rematch Sean Santella after their previous fight ended in a draw at BRAVE CF 42. The bout was set to main event the card, but an injury forced Santella to withdraw from the contest.

Ireland’s O’Driscoll then stepped in to face Torres on only eight-days notice. The Irishman made Torres work hard for his win, but when the judge’s scorecards were read out, there was no disputing that Torres was the clear winner on the night.

“I’m excited to face the winner of Ali Bagautinov vs. Dustin Oritz because those were two guys that I was watching even before I started in MMA. It’ll be awesome to fight one of them”, an elated Torres said following the fight.

Check out the full results from BRAVE CF 49