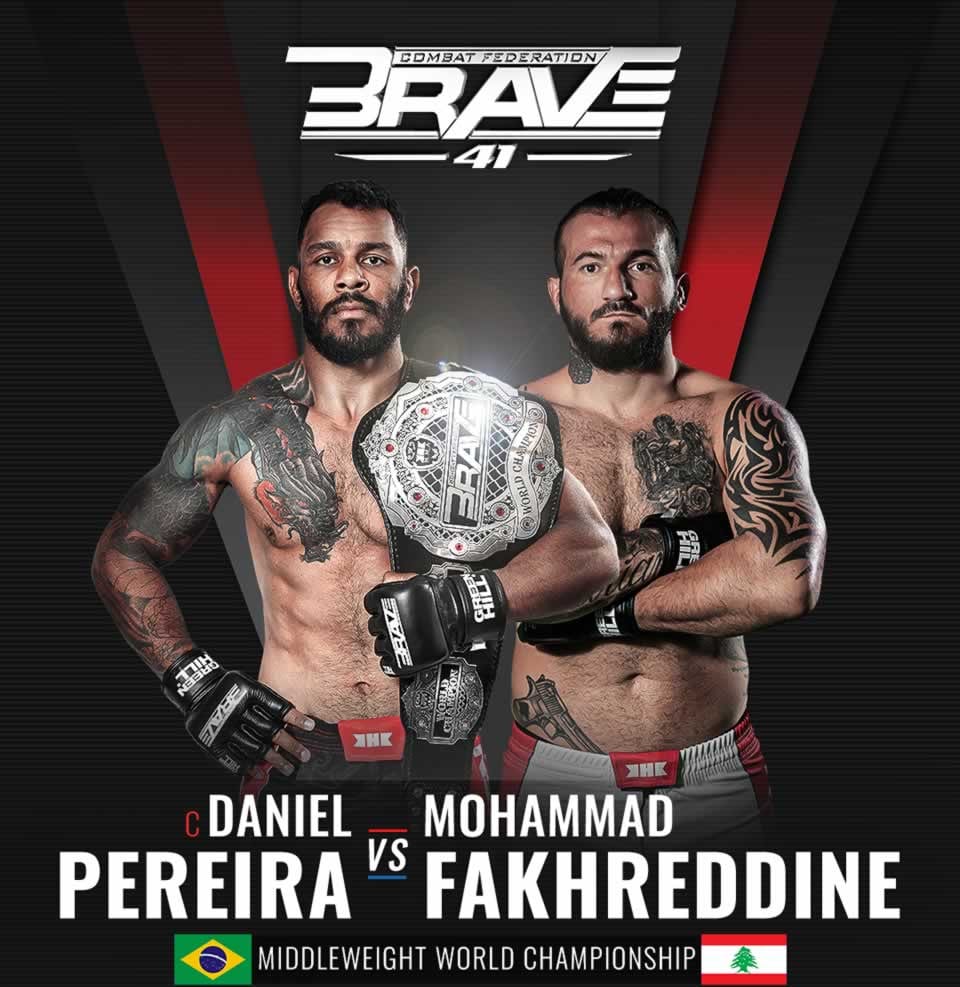 BRAVE CF returns this week with BRAVE CF 41 taking place tomorrow (Thur. September 17) inside the Bahrain National Stadium, Bahrain. The event will be the first of three consecutive shows in the Gulf State of Bahrain, with BRAVE CF 42 and BRAVE CF 43 scheduled to occur on September 24 and October 1.

Headlining this week’s event is a middleweight title clash with reigning champion Daniel ‘Gaucho’ Pereira facing off against Mohammad Fakhreddine. Gaucho will be making the first defense of his title after stopping South Africa’s Chad Hanekom last December. The heavy-hitting Brazilian will have his hands full in Fakhreddine. The Lebanese athlete is an aggressive fighter who has only gone the distance twice in his career. At 36-years-of-age this could be the last time Fakhreddine has shot at the title, so expect to see fireworks in the opening round.

The co-main event will feature an all-Russian middleweight clash between Denis Tiuliulin and Ikram Aliskerov. This bout will be Aliskerov’s first fight back since a devastating KO loss to Khamzat Chimaev in August of 2019. The 27-year-old, who was undefeated at the time, was regarded as one of the promotions rising stars, and there will be a lot of interest in how he performs on return.

Ireland’s Cian Cowley will also be under pressure to get a win under his belt when he meets Egypt’s Ahmed Amir in a super lightweight clash. The SBG fighter started his BRAVE CF career in 2018 with back to back victories. However, since then, he has gone on a run of three straight losses. This will be his debut at super lightweight, and it will be interesting to see if the change makes any difference to his fortune.

The night’s opening bout will be an amateur bout featuring the highly touted Bahrain prospect Abdulla Alyaqoob. The KHK MMA fighter is trained by the BRAVE CF super lightweight champion Eldar Eldarov and will take on Tajikistan’s Umed Urfonov.

The seven bout card kicks off at 11:00 am (EST) and can be watched by US fans on Fite or the Fight Network.