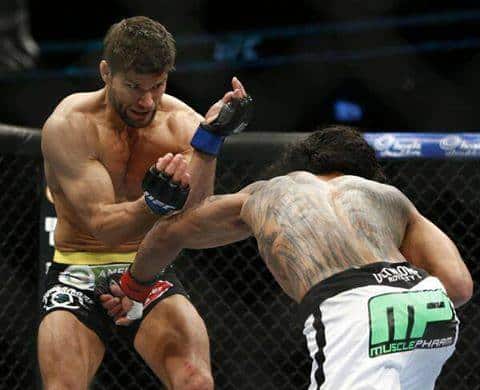 ‘Cojones’, your ‘manhood’, your nuts. These are just a few playful terms men use to describe our downstairs friends. They’re good to us, really – they provide us with courage when we need it, while also assisting with the creation of testosterone and obviously, breeding.

Unlike women, however, the male reproductive system lays outside of the body cavity, making it an easy victim for attack. In this article, we have compiled eight instances where fighters were at the receiving end of woefully placed attacks in the groin region.

Some times the strikes cause an end to the fight, some men have rallied back, and some lose as a result – but deserve it (see last page).

Although the prospect of another man’s private parts getting assaulted may make some uneasy, it is important to remember that the purpose of this list is not to gawk, but rather take lessons from. Let’s take his analogy into consideration: Say you have a pet you care about deeply, and you find out that they don’t have that long to live, you’d spend more time with them while you could, right?

Unfortunately, most situations like that do no provide warning, as is life. So with that example in mind, take into consideration that these eight fighters had no idea and no warning of the destruction that their privates was about to fall victim to. Don’t you think they would have spent more quality time with their nethers had they known the result of the bout before hand? Yes.

Run down the list, cringe here and there, and use every example as another reason to appreciate your balls (or ovaries for our female readers). 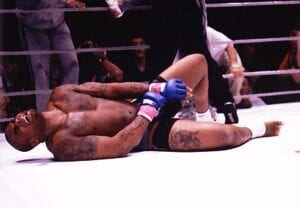 This is arguably the loudest shot on the list. A highly anticipated fight that fans expected to be a slug fest, Yvel and Silva did not get the chance to live up to expectations. Following a brief period of staring with a scarce amount of strikes thrown, Wanderlei Silva landed one of the most brutal kicks to the groin known to man.

Silva was known as a Muay Thai wrecking machine, having been the product of Chute Boxe under the tutelage of Rafael Cordeiro. One can deduce that given Silva’s striking credentials, the kick hurt Yvel – badly. After a span of pain and suffering in the ring, doctors waived off the bout, leaving fans disappointed and men keeling over across the globe. 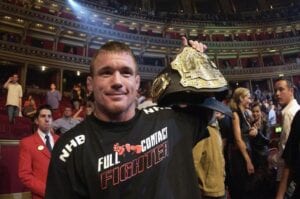 In their first bout at UFC 45, Matt Hughes soundly defeated Frank Trigg with a standing rear naked choke in the first round, needless to say, Trigg wanted revenge. His opportunity came at UFC 52 in a fight that had fight fans on their feet. Following a feeling out process and some clinch exchanges, Trigg uncorked a piston-like knee to the Illinois native’s private parts, followed by a barrage of punches and a close attempt at a rear naked choke. Hughes rallied back, however, and ended up getting Trigg in a choke of his own, securing the tap in the first frame.

The unique quality of this fight is that despite pleading to the referee to pause the bout, Hughes received no break, having to pull himself up by his boot straps and overcome adversity all by himself, which he was able to do in dramatic fashion 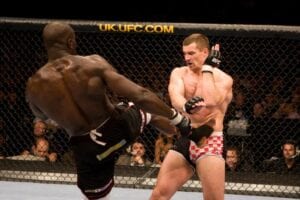 Coming off a loss in the headlining act at UFC 70 to Gabriel Gonzaga, Cro Cop was looking to make his way back to the winner’s column. Cheick Kongo had different plans. Following a few exchanges on the feet and in the clinch, the French kickboxer landed a series of knees to Mirko’s groin, sending him wilting to the canvas.

The Croatian eventually recovered, but experts argue he was not the same for the duration of the fight, ultimately losing a decision. Whether or not the illegal knees contributed to his loss remains speculative, but they certainly did not do him any favors. 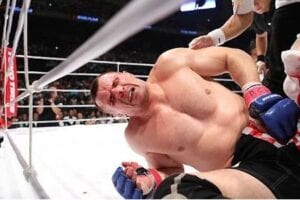 Mirko’s boys took a trouncing yet again in his career, again coming at the knees of a taller, more powerful striker. Like Kongo, Allistair Overeem has a lot of power in his knees, having scored multiple knockouts with them in MMA and kickboxing bouts. In this instance, however, it wasn’t the shin that became the target.

After a brief feeling out process, Overeem engaged Mirko, landing one of the worst assaults on testes seen in a ring. After writhing in pain for some time, the fight was waived off and ruled a no contest. Legend has it that further investigation revealed that Overeem actually damaged Mirko’s testes so bad that one of them retreated into his body cavity for a period of time. 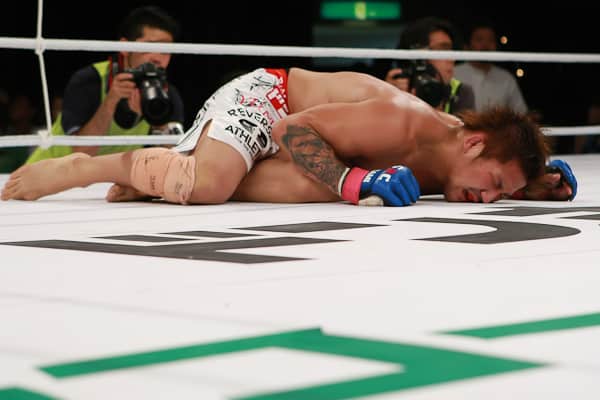 Osawa and Toida were not touted as the next great champions in their weight divisions, but merely as two skilled fighters looking to pick up a win. Unfortunately, that night at WVR 13, neither man had the bout go the way they wanted.

Following some feeling out and few various exchanges, Toida landed a low kick straight to the groin of Osawa with full shin contact. The strike was hard enough to make fans think that the fight would be over as a result, and the assumption was correct. Although the strike appeared to be unintentional. 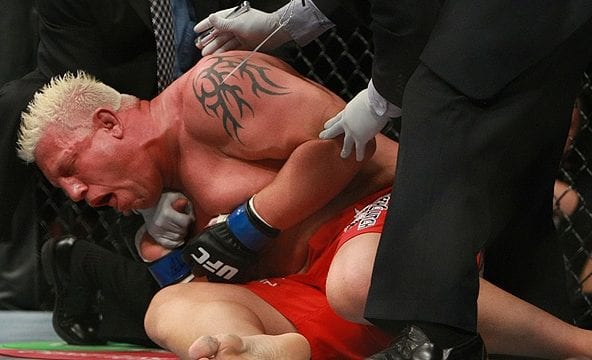 Chris Tuchscherer, a former training partner of Brock Lesnar, was known primarily as a wrestler. In his UFC bout with Gabriel Gonzaga, he made an effort to take down the Brazilian knockout and submission artist in the early going, to no avail. Following a series of take down attempts and some rough striking exchanges, Gonzaga landed a low kick that missed it’s mark, landing square in the wrestler’s ‘junk’.

After excessive writhing, the bout eventually restarted. It did not last long, however, as Gonzaga successfully landed enough shots to stop the bout mid-way through the first round. 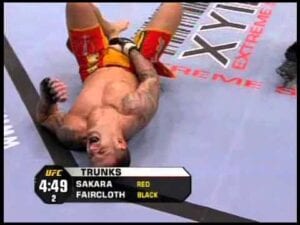 Alessio Sakara was touted as a great boxer coming into his UFC debut against Faircloth, having a considerable amount of hype behind him from International fans. His first foray into the octagon did not go as planned, however, as his opponent ended his night early with an illegal low blow.

The kick was clean and hard, landing square in the danger zone. After some time attempting to shake it off, the Italian fighter assessed that he could not continue. The bout marks one of only a handful of times a fight has been stopped by a groin strike in the UFC. 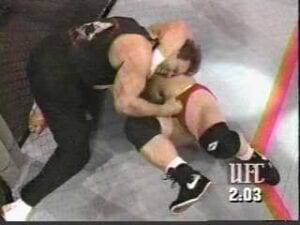 Most of the bouts on this list make us feel sorry for the victims of these unfortunate incidences, but in a pleasant contrast, this last example serves as a bright display of justice.

Joe Son, a Pride, K-1 and UFC 4 competitor, carried a dark secret into the cage. That secret was his participation in a horrific 1990 rape case in California, a crime he was eventually arrested for in the last few years. With that information handy, it makes the bout he had with Keith Hackney a lot easier to stomach. Over the course of the bout, a few scrambles took place, one of which was Hackney in side control on Son while caught in a guillotine.

While in this position, Hackney, a muscular, 200 pound former board- breaking karate stylist proceeded to smash in Son’s groin with uppercuts, turning his adult parts into what many assume to be some sort of puree or pulp-like substance.

Karma is not someone you want on your bad side.