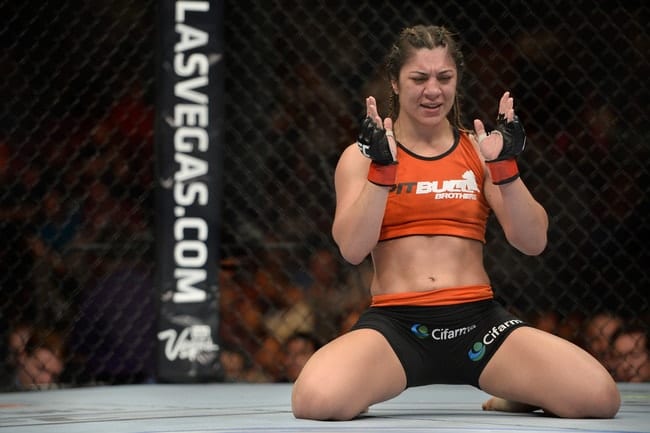 Bethe Correia is at it again, only this time it’s Dana White, Lorenzo Fertitta and Sean Shelby that the Brazilian is calling out….

Former UFC women’s bantamweight title challenger Bethe Correia suffered the first loss of her career at UFC 190, and it was a big one. The Brazilian ‘Pitbull’ faced Ronda Rousey after an intense rivalry, only to fall flat on her face on fight night, quite literally. Having campaigned for a fight with just about anyone in the time since, Correia’s calls have gone unanswered.

It seems that switching up her training is one positive outcome from her rude awakening against ‘Rowdy’, as Correia recently did a stint at AKA (American Kickboxing Academy’. It also appears that she’s changing tactics as far as campaigning for her next fight, instead asking Dana White Sean Shelby and Lorenzo Fertitta for a TUF (The Ultimate Fighter) coaching gig:

All TUF Brazil coaches were men,it’s time to have two women leading I can handle it @danawhite @ufc @ufc_brasil @seanshelby @lorenzofertitta

The most recent instalment of TUF Brazil featured Anderson Silva dn Shogun Rua as opposing coaches, until ‘The Spider’ was replaced by Antonio Rodrigo Nogueira following the ex-middleweight champ’s failed drug test fiasco. Ronda Rousey and Miesha Tate made history as the first female coaches on the American version of the popular reality TV show, so how about Bethe Correia for the Brazilian gig?

Perhaps the disappointment of Miesha Tate’s recent title fight snub in favor of Holly Holm could come in to play here? ‘Cupcake’ has voiced her displeasure with the promotion’s decision to refuse her a trilogy fight with Rousey, and there’s already a little beef brewing between the two following some incendiary trash talk by Correia.

Would you be interested in seeing Bethe Correia and Miesha Tate as the first female coaches on TUF Brazil?