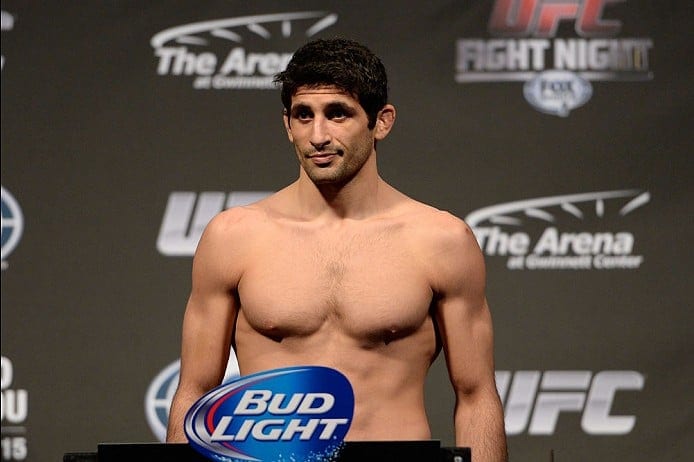 With four straight wins in the Octagon since August 2014 and an upcoming bout against No. 6 Michael Johnson at August 8’s UFC Fight Night 73, No. 14-ranked lightweight Beneil Dariush is currently on the cusp of big things in one of the toughest divisions in all of mixed martial arts (MMA).

However, there’s one small problem blocking his rise up the crowded 155-pound ranks, and that’s the glaring fact that UFC lightweight champion Rafael dos Anjos is a flagship member of his Kings MMA training camp. Dariush not surprisingly doesn’t want to eventually face his friend, so he could be headed for a move up to the equally stacked (if not more) welterweight division.

Discussing the situation with MMA Fighting recently, Kings MMA coach Rafael Cordeiro stated that once Dariush reaches a certain point in the rankings, he’ll move up to 170 pounds to make sure a fight with dos Anjos never becomes a reality:

“When he gets to the top 5 of the lightweight division, he will go to 170 pounds. He’s fighting at the same division as Rafael, but he will go to 170 when he becomes a top 5. He will give welterweight a lot of trouble.”

According to Cordeiro, the cut down to 155 pounds is already a tough one for Dariush, who normally walks around at 190-195 pounds. That fact coupled with the possibility of facing dos Anjos will prompt the move up to welterweight, which Cordeiro deemed the next logical choice.

When he does, the famed trainer said his team would have top-level names in all of the major UFC divisions:

Flaunting two UFC champions and a host of other elite combatants, Kings MMA is one of the hottest teams in the fight game right now. But with a crowded slate of lethal welterweights potentially awaiting him, will Dariush be able to make a similar splash in a bigger division?