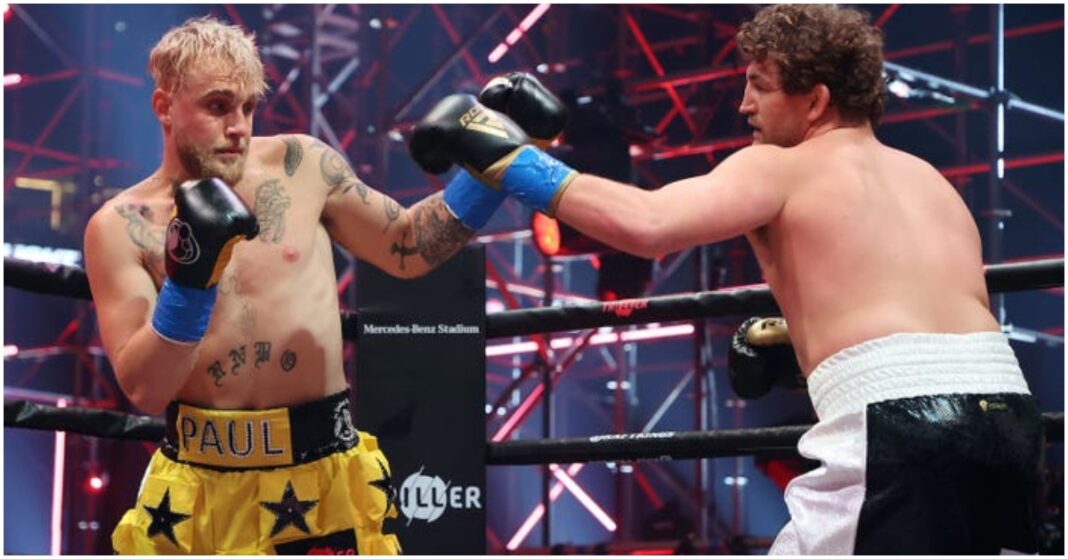 Ben Askren has finally given props to Jake Paul for his boxing skills after being knocked out by the YouTuber and then seeing ‘The Problem Child’ outpoint his friend, Tyron Woodley.

‘Funky’ retired from MMA in 2019 after suffering consecutive stoppage losses to Jorge Masvidal and Demian Maia. A major hip surgery followed before he announced he would return to fighting to take on Paul in the boxing ring earlier this year.

Things did not go well for Askren who is known for his elite-level wrestling skills and distinct lack of striking ability. Paul caught him flush in the first round and despite the fact, Askren was able to beat the count the fight was quickly waved off.

Paul has since gone on to beat former UFC champion, Woodley, over eight rounds and even showed some heart to survive tough moments against ‘The Chosen One’

Now, Askren is finally ready to admit that Paul is actually a decent boxer.

“So the thing I said when I went in to fight him [Jake Paul] is maybe he’s good or maybe he’s not. We really have no idea to this point, you know,” Askren said on Lex Freidman’s podcast.

“I knew that Tyron was a lot better in boxing than I was. And so I thought that there is a good likelihood that Tyron beats him up but there is a chance that Jake is kind of good at this. I think what played out is he’s kind of good at it. And if you saw the way I saw it, he was still impressive in his showing and he has obviously put a lot of time into it. So, he’s not bad, I’ll say that much.” (Transcribed by BJPENN.com)

“I think people enjoy it.” Askren told LowKickMMA about celebrity boxing ahead of his fight with Paul. “As far as ‘Is Jake Paul a real fighter?’ No. I don’t really think so. But, do people want to watch him box? The answer is yeah.”

“There is nothing to be made from either one of his fights.” Askren added. “I always joke with some of my kids. It’s like well, you know, I want you to wrestle competition that’s at your level because if you don’t if I throw you in there against Cael Sanderson or Jordan Burroughs, you’re just going to get demolished and I’m not gonna be able to see anything. If you go get someone who’s a bum you’re just going to pin them in 10 seconds, and I’m not going to get to see anything. So with those matches that are really lopsided and in this case it’s because the other person is really terrible.”

“You don’t really take too much away from that because it’s too hard to because the competition is so low that pretty much no matter what he did. He was going to look good.”

Do you agree with Ben Askren? Is Jake Paul a decent boxer?