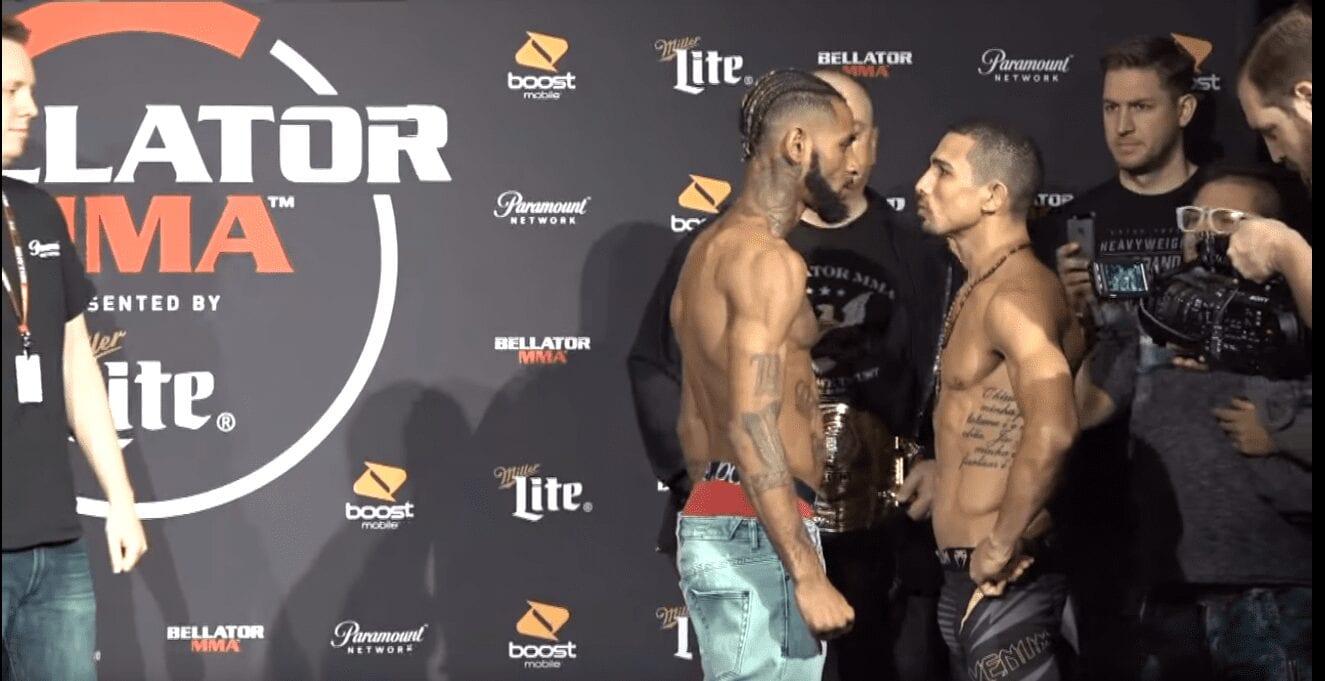 It’s once again fight day here at LowKickMMA, and the talent on display tonight (Friday, March 2, 2018) will come in the form of Bellator 195. Headlining the card are Darrion Caldwell and Leandro Higo, but there’s a whole bunch of great fights also taking place on the rest of the main card.

Darrion Caldwell and Leandro Higo meet in a bantamweight title bout in the main event. In round 1, both fighters took their time to get started. Caldwell was able to score a takedown midway through the fight but Higo was able to get back to his feet. Caldwell dragged him down, locked in a guillotine choke and that was a wrap! Caldwell successfully retains his bantamweight title.

Joe Warren and Joe Taimanglo meet in a bantamweight bout in the co-main event. In round 1, Taimanglo came across the cage quickly and knocked down Warren. They scramble on the ground and back to their feet. Fast start to this one. Warren was able to take him down midway through the round and slammed him to the ground while in guard. Taimanglo was able to get back to his feet and landed an overhand right. In round 2, they kept things standing for the majority of this round. The pace slowed down as both men were trying to figure the other one out while striking. Taimanglo was pressing the action while Warren was looking for openings. Very close round. In round 3, Warren was able to trip Taimanglo and get a takedown that led to him getting full guard. Baby Joe was able to get the back of Warren but Warren was able to get to his feet. Baby Joe went for a takedown and got it late in the round. Warren ended the fight on top in guard. The judges gave the win to Taimanglo by split decision.

Kristina Williams vs. Emily Ducote is next in a female flyweight bout. In round 1, they had a feeling out process early. Williams did land a head kick early that popped the crowd. Ducote was looking to counter strike while Williams was walking her day. Both girls were mixing things up nicely. Ducote was able to sweep the legs out from under Williams with a minute to go and got full guard. In round 2, they kept it mostly standing. Ducote started to press the action but the range was not her friend as Williams had the reach and able to work her jabs to the point where it busted open Ducote’s noise. In round 3, Williams started pouring it on this round and Ducote’s noise was a mess at this point due to all of the blood. Ducote was able to stay in it and eventually got a takedown with about a minute remaining. Ducote was able to get the mount and rained down strikes. Ducote went for an armbar to close out the fight. The judges gave the win to Williams.

Opening the main card on Spike TV is Juan Archuleta vs. William Joplin in a featherweight bout. In round 1, Archuleta stunned him with a lead uppercut but Joplin hanged in there and Archuleta clinched with him. Archuleta got him down to the ground and rained down strikes with a mixture of elbows from full guard. Joplin was able to get back to his feet midway through the round and they went back to striking. Archuleta was able to score another takedown late in the round to continue to pick up points. Archuleta kept him grounded to finish up the round. In round 2, Archuleta threw him to the ground early on then Joplin got up and immediately taken down. Joplin got to his feet and Archuleta missed a spinning back fist. Archuleta was able to once again take him down. Joplin had no takedown defense. In round 3, the story of this entire fight is Joplin have no answers to stuff takedowns but being able to get off his back only to be taken down again. This round was no different. They had a wild exchange to end the round. The judges gave the win to Archuleta by decision.