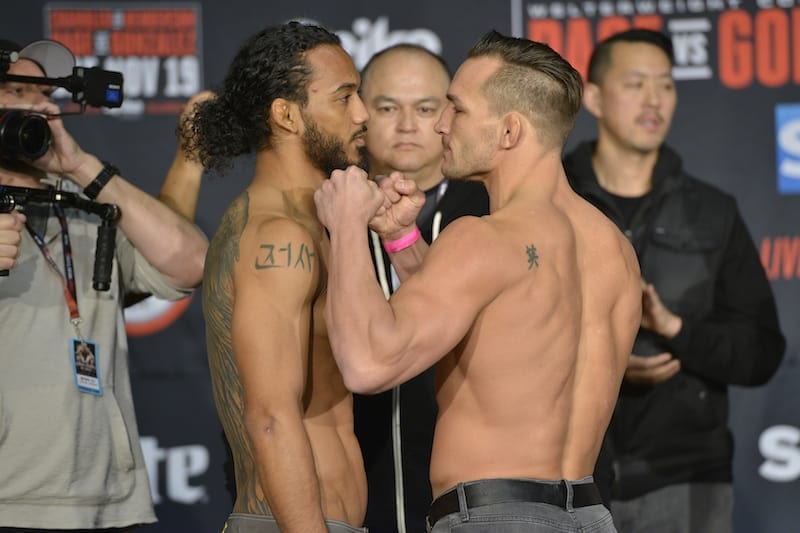 It’s once again fight day here at LowKickMMA, and the talent on display tonight (Saturday, November 19th, 2016) will come in the form of Bellator 165. Headlining the card are Michael Chandler and Benson Henderson, but there’s a whole bunch of great fights also taking place on the rest of the main card.

Michael Chandler and Benson Henderson met in a lightweight title fight in the main event of Bellator 165. In round 1, Chandler knocked him down early with a leg kick. Halfway through the round, Chandler rocked him with a right hook and then two more. Chandler with a nasty uppercut and Henderson looked to take the fight to the ground, but Chandler started landing a series of strikes. Chandler with a suplex takedown and went for the guillotine choke but let it go. Henderson scrambled to his feet, and Chandler landed some more huge shots. Henderson scored a takedown. In round 2, Henderson dropped him with a quick shot early in the round. Chandler slowed down and was catching his breath. Henderson kicked him in the nuts, and there was a pause in the action. They exchanged to the sound of the bell. In round 3, they exchanged leg kicks early and then clinched with Henderson applying the pressure from outside. They separated halfway through the round. Henderson shot in for a takedown, but Chandler caught him and locked in a guillotine choke, but Henderson slipped out of it. Chandler got guard and worked him over with strikes. Chandler transitioned to back mount, but Henderson scrambled out of it. In round 4, Chandler came out and slammed Henderson to the ground. Chandler worked him over with strikes from half guard. Henderson scrambled to his feet after a switch of his hips and Chandler pressed him up against the fence in the clinch. Henderson took him down and went for a submission, but Chandler got out of it, and the bell sounded. In round 5, handler stumbled to his stool in between rounds. Henderson took him down halfway through the round and got his back. Henderson worked him over with strikes while he had him in a triangle. Henderson went for an armbar, but Chandler got out of it. Henderson beat him down with strikes to end the round. The judges gave the win to Chandler by split decision. Chandler is still the Bellator Lightweight Champion.

Michael Page and Fernando Gonzalez met in a welterweight bout in the co-main event of Bellator 165. To say this fight was disappointing would be a huge understatement. In round 1, Page pressed him early but Gonzalez was just back peddling, and there wasn’t a ton of action. In round 2, the same as the first round. Page started to turn the burner up and was landing more strikes, but Gonzalez was just covering up and trying to survive. The fans hated this fight and booed throughout the entire round. Page landed a stick jab and barely missed with a cross. In round 3, Gonzalez came out and clinched with Page up against the fence. Page separated with him and landed some shots. Gonzalez clinched with him later in the round, and it didn’t go anywhere. The fans were very upset with this fight. The judges gave Page the win by split decision.

Adam Piccolotti and Brandon Girtz met in a lightweight bout. In round 1, Piccolotti clinched early but ate a right hook in the process. Piccolotti hit a flying knee strike, but Girtz shook it off and tossed him to the floor. Piccolotti presses forward, but Girtz stayed in and was trying to find his range. They had a nice exchange to end the round. In round 2, Piccotti continued to press the action as Girtz slowed down. Girtz missed a spinning back fist. In round 3, Piccolotti scored a takedown midway through the round but Girtz scrambled right back to his feet, and they went back to striking. With two minutes to go, Girtz fired up and landed a combo that backed up Piccolotti. Girtz took him down and got guard. Piccolotti scrambled and locked in the kneebar, but Girtz got out of it and got on top and landed some strikes. The judges gave the win to Piccolotti by unanimous decision.

Keri Melendez faced off with Sheila Padilla in a women’s flyweight bout. This one did not last long at all. Melendez dropped her with a straight right hand and then finished her on the ground with strikes. Quick and straight to the point by Melendez.

Linton Vassell and Francis Carmont met in a light heavyweight bout. In round 1, they clinch early, and Carmont took him down, but Vassell scrambled and got on top in mount. Vassell worked him over with strikes.Vassell scrambled and got back mount and landed some strikes. In round 2, Vassell took him down and got back mount within the first minute of the round. He worked him over with strikes. Vassell stayed in this position for the majority of the round and was looking for the rear-naked choke. In round 3, Vassell scored an early takedown but Carmont scrambled to his feet, and they had a nice exchange. Carmont got the better of him while standing with his kicks and strikes. The judges gave Vassell the unanimous decision victory.

Here are the quick results: