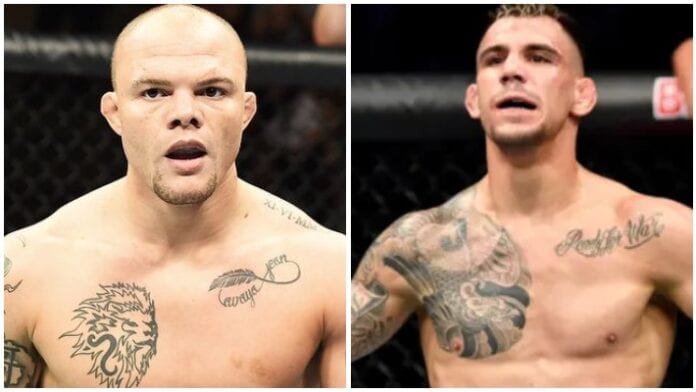 Anthony Smith put on a dominant display before submitting Ryan Spann in the first round of the UFC Vegas 37 main event.

‘Lionheart’, who had just stretched his win streak to three, got on the mic and immediately called for a rematch with Aleksandar Rakic, who was the last man to beat him.

“I want Aleksander Rakic,” Smith told Michael Bisping post-fight. “He’s just sitting around. He’s not next for the title. Either I get that fight or I’m going to skip it. That’s what I want. I want someone ahead of me and I earned that.”

During Smith’s post-fight chat Rakic tweeted out to let his rival and all the fans know that he is ready to throw down later this year.

‘The Count’ relayed that information to Smith, who replied by saying “Merry Christmas to me.”

Speaking at the UFC Vegas 37 post-fight press conference, Smith explained why he chose to call for a rematch with Rakic.

“That’s what I wanted,” Smith said. “That’s what I asked for. That’s the fight I’ve been talking about. It’s nothing personal. Me and Rakic have had nothing but positive exchanges with each other both before and after the fight. It’s purely competitive. I want his spot. He took mine, I want to take it back.”

As well as trying to right a wrong, Smith genuinely believes that a win over Rakic is worth more than beating any of the other contenders who are similarly ranked.

“No disrespect – I think Dominick Reyes is an easier fight (than Rakic), but that doesn’t get me closer to the title,” Smith said. “I need what’s going to get me closest to the title fight. I could hang around and wait for the loser of the title fight, but I don’t want to wait. I think for me stylistically – not saying for everyone – but for me, Rakic is probably the toughest fight out of those (top) five guys.” (Transcribed by MMA Junkie)