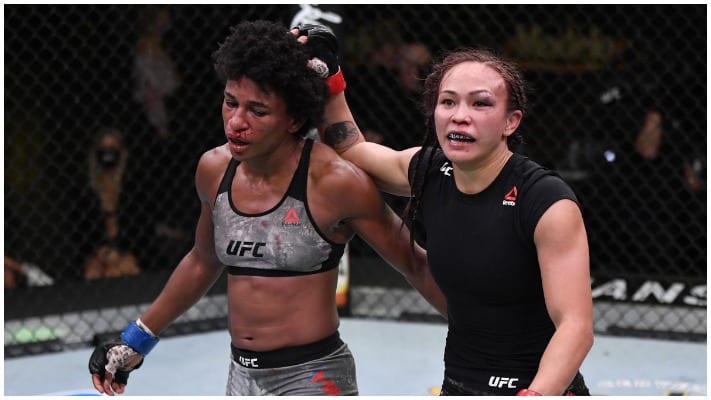 Strawweight contender Angela Hill has opened up about her split decision loss against Michelle Waterson in the UFC Vegas 10 main event this past weekend. ‘Overkill’ told media post-fight of her disappointment in falling short in a second consecutive fight that she believes she’d won.

“It sucks, man,” Hill said following her defeat. “I keep ending up in this position where I put my all into getting the finish and getting the decision and it just doesn’t go my way. I definitely felt like I did more damage in that fight.”

Hill looked great early and sailed into a two-round lead. The 35-year-old explained that despite Waterson’s resurgence in the later round she thinks the decision should have gone her way.

“I lost the third round because I couldn’t get up,” Hill said. “I felt bad about kicking her in the face, but I was aiming for the chest. And then the fourth, I didn’t go forward enough. I was worried about the takedown too much. In the fifth, I finally said (explicit) it and went forward and did everything that I should’ve done in the fourth round, and I still didn’t get that fifth round. It sucks.

This latest loss has Hill considering a change in tactics moving forward.

“It was close,” Hill said. “This fight was a lot closer than the (Claudia) Gadelha fight when it came to strikes landed because she was landing some push kicks to the face and a couple of side kicks when I was hesitating. I thought this fight was closer than the last one. I tried to blitz her, but I felt like I did way more damage. It sucks I’m on the losing end again. I have to start taking (explicit) down again, hugging them more.” (Transcribed by MMA Junkie)

Do you think Angela Hill should’ve got the decision against Michelle Waterson?