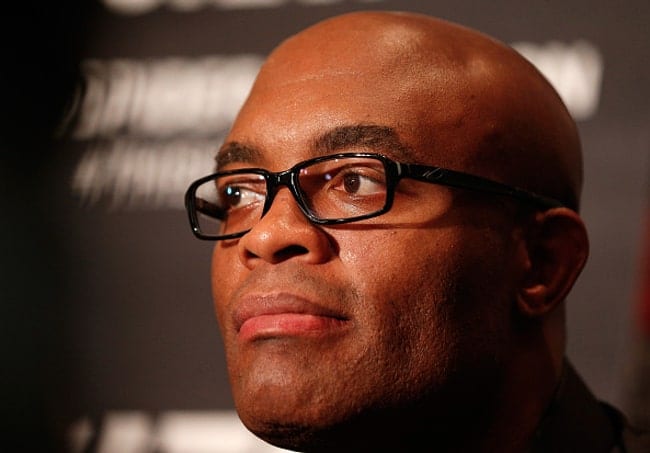 Today (August 13. 2015) is the day former UFC middleweight champion Anderson Silva stands before the Nevada Athletic Commission (NAC) to plead ‘not guilty’ in the face of multiple banned substances found in his system during his failed pre-and post-fight UFC 183 drug screens.

Silva had anabolic steroids drostanolone and androstane along with banned anti-anxiety and sleeping pills in his system, and the Brazilian mixed martial arts legend will be arguing that a tainted sex supplement was the reason for his steroids bust.

After all of the other items were addressed Nevada deputy attorney general started taking a strong stance detailing the timeline of Silva’s failed tests, focusing on the point that Silva had indeed admitted to taking a supplement that included Drostanolone which was completely separate from the findings of the test which Silva and his team insisted was due to the sexual performance supplement. Eccles confirmed he had never received any evidence of the supposed supplement, nor had he been informed that Silva’s team had conducted independent testing that could disprove his failures.

The testing doctor from SMRTL, the first facility where Silva’s samples were tested, got on the phone to explain the testing process of ‘A’ and ‘B’ samples at length, confirming that the second samples had indeed come back positive.

‘The Spider‘s’ lawyer Michael Alonso then took the stand after Silva’s entire team was sworn in, along with Dr. Scott, a representative from Quest Diagnostics, the second testing facilities where the samples were sent. The issue of litigation packets concerning the tests caused a momentary halt to discussions as they were handed out. After the exhibits were finally admitted, Silva’s team was given the stand, where Alonso reiterated Silva’s stance that he had never willingly taken anabolic steroids and his team subsequently sought the source of the failed tests for steroids.

Dr. Scott was consulted for said task, and a list of supplements being taken by Silva was cited but not provided. The supplement in question was brought up by Alonso having contained Drostanolone, not just Drostanolone metabolites. Alonso alluded that the trace amount of the supplement containing Drostanolone was not found by SMRTL but did appear in the test conducted by Quest. Alonso then said that the ‘B’ sample sent to Quest came back negative for banned anabolic steroids. Silva’s team did not oppose the positive test for benzodiazepines. He focused on the the discrepancy between the two tests at varying facilities, noting that the tests could have gone back and forth between both positive and negative.

Alonso also stated Silva did in fact disclose his use of benzodiazepines, using them for anxiety and to help him sleep. Alonso agreed that the commission did have the authority to test Silva on Jan. 9, Jan. 19, and finally Jan. 31. Eccles then contested Dr. Scott’s validity as an expert on toxicology when it was found that he had a J.D. rather than a PhD in an applicable science. Silva’s team apparently (and surprisingly) did not bring any paper evidence of the tainted supplement at the basis of their defense.

Dr. Scott eventually took the stand and purveyed his credentials. Commissioner Pat Lundvall took a very substantial amount of time questioning his qualifications, perhaps signaling not the greatest start for the MMA legend. Scott then went forward with his involvement in the fiasco, stating he had tested 4-5 supplements that Silva had taken to be tested for Drostanolone and Androstane. One liquid supplement for sexual performance did reportedly contain trace amounts of the former steroid.

However, Dr. Scott did not have any official evidence of the supposed supplement in question, a valid question from the NAC and the deputy attorney general. The commission deemed it ‘hokey,’ and called Silva’s chain of command ‘horrible’ without documentation. Scott said he ‘assumed’ that the supplement that was supposedly tainted with Drostanolone was one of the substances Silva had taken, and Scott could not confirm nor deny when Silva had taken the supplement or the name of the actual substance. Scott said it had been represented to him as over the counter sexual performance enhancer Cialis, but it was not official Cialis.

Chairman Aguilar said that a commissioner had to leave soon so they would need to wrap up expert testimony so they could formulate a punishment.

Silva himself finally spoke up, saying it was ‘his business’ why he was taking the substance. Pleading the fifth amendment, he was asked why he did not simply ask a doctor to get a prescription for Cialis. The fighter said he could not. Scott said that negative results from the Jan. 9 and Jan. 31 tests would be the only reasonable assertion to be accrued.

With Silva’s defense now complete, the commission then called for a short recess, offering Alonso a few minutes to collect his team after they had ‘pulled his feet out from under him.’

During the break, Ed Soares was apparently visibly angered with Silva’s translator, who had supposedly not translated his words correctly. Apparently ‘The Spider’ did not plead the fifth. Upon reconvention, Alonso suggested Soares be sworn in to remedy ‘The Spider’s’ misunderstood words. With that established, Silva stated that he could not get the supplement in America as it came from Thailand. Silva said he could not get a prescription for it like the commission asked him about. Soares said that Silva did not mean to plead the fifth.

Silva confirmed he took the supplement, which was called a ‘clear liquid in a blue vial’ from Thailand that he supposedly got from a friend The commission asked why he would do something like this given the scope of his athletic career, worldwide fame, and all that he had come back from. Silva admitted that he was human and he had made a mistake as he and Soares insisted he did not know that the sexual enhancer contained Drostanolone. He denied using steroids, saying that this was all a new topic for him.

‘The Spider’ said that he had used the enhancer for three months prior to the fight and this was the first time he had ever used it. He was asked for and gave the commission the name of the ‘friend’ who had given him the supplement from Thailand. Then he was asked if he had attended UFC seminars on banned substances. He said he also had not followed other fighters’ careers, and that may have been a reason why he sat before the NAC today.

Lundvall asked him how long he had known the ‘friend’ who had given him the supplement, and what their relationship was. He said he had been friends for just one year, and described the day that he accepted the sexual performance substance from him. He said that he trusted Marcos Fernandes, the man who supposedly gave him the substance, but didn’t remember the day that he began taking it.

The timeline was discussed back and forth, and Silva was asked if he was taking the supplements he had stated to Dr. Scott. He said he was. Lundvall then asked Silva about the pre-fight questionnaire where he did not state he was taking any supplements. Silva said he did not want to tell the commission he needed to use Viagra. Lundvall moved on to the benzos, to which Silva replied that he took them to make him feel better. He said that the drugs were to help his sciatica, and he only took them once in a hospital in Brazil and on the night of the weigh-ins in Las Vegas.

Silva also said he did not reveal that he had taken benzodiazepines, nor did he tell anyone from the NAC that he had ingested them at the fight. Finally, Lundvall asked Silva if he accepted the fact that it was his responsibility to know what he put into his body and if it was banned or not.

Silva acknowledged that he did use the anti-anxiety and sleeping pills, but the anabolic steroids were the result of a tainted sexual performance enhancer. ‘The Spider’ said all humans make mistakes, and he was met with the question of why he went to the hospital for an issue with his sciatic nerve while never seeking a prescription for a sexual performance enhancer.

Soares cleared up that he did not think it to be a medical issue but a performance issue, and that Silva had been prescribed the benzos for his back by a doctor, which he only took the two times mentioned prior. The focus was then shifted back to Dr. Scott, who was asked if he had never been admitted as an expert witness in a court of law. He responded that a court had not done so, but a police commissioner did before when he was deemed to be less than an expert on steroid clenbuterol.

Mr. Alonso asked the commission that if Silva was found guilty, then his fine would be applied to his purse of $600,000, without his $200,000 win bonus taken taken into effect. The commission then asked why Silva stated he had stoped using the substance with the steroid Drostanolone on January 8, it would show up on the January 31 post-fight test. Dr. Eichner said that the figures would not be consistent with the results seen.

Silva said he recalled taking it when he got to Los Angeles to finalize his training, and that he may have taken it the week of the fight when he got to Las Vegas. The commission then wondered why he suddenly remembered the dates on which he used the substance, citing large inconsistency with his response.

Lundvall then went back to probing Silva about his knowledge that he had to disclose what medications and supplements he took truthfully. He said he would feel uncomfortable telling them that he took a sexual performance enhancer. Eccles asked the commission to consider weighing the testimonies of Dr. Scott and Dr. Eichner differently based on the validity of each one. The commission closed by asking Silva if he had ever been drug tested before fight night, and he said he had only been tested on fight night.

Chairman Aguilar opened the punishment discussion citing the inconsistency of Silva’s testimony, suggesting the higher end of the punishment of 12 months. Lundvall then again cited the pre-fight medical questionnaire where he had intentionally falsified information about the seven supplements he was ingesting. She also cited the admission of him taking the benzos, and also said Quest’s process was less effective than that of SMRTL. Considering that, Lundvall agreed with Chairman Aguilar’s suggestion that Silva be handed a punishent towards the higher range of the spectrum.

Commissioner Marnell agreed with the inconsistencies, and purveyed the sense that the NAC had not been given the fully story. He believed that Silva had most likely used the banned substance to return from his devastating injury suffered at late 2013’s UFC 168. Commissioner Avansino agreed with the rest of the commission.

Lundvall motioned for Silva to be suspended for 12 months, forfeit his win bonus, pay a fine of 30 percent of his purse, pay the legal fees for the commission, and overturn his win over Diaz to a no contest. The motion was approved by the commission.