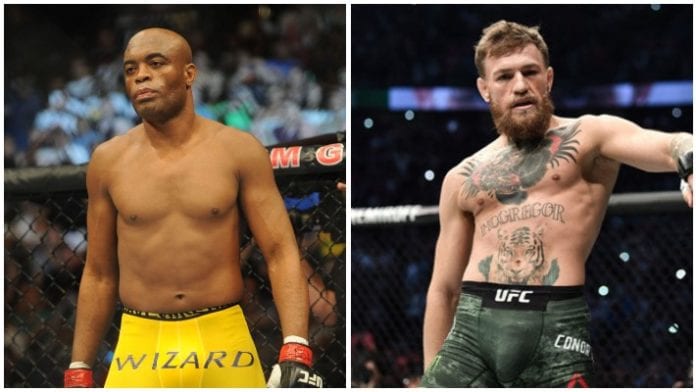 Anderson Silva is only looking for super fights at this point in his career.

The 45-year-old is ready to return to action for the first time since his TKO loss to Jared Cannonier at UFC 237 in May last year.

He was previously campaigning for a super fight with Conor McGregor back in May and the Irishman was receptive to the idea. “The Spider” even claims a fight was agreed upon by both parties to take place at 170 pounds as early as last year.

However, the UFC was not on board with the idea.

“UFC owes me a super fight by contract,” Silva told Combate (via Sherdog). “Conor [McGregor] called me out right after my fight with [Israel] Adesanya. Our team talked to his team and we agreed upon a bout at [170 pounds], but something happened and UFC decided to not make it.”

While a McGregor fight is unlikely in reality, a super fight with Anthony Pettis is more of a possibility and is something that Silva would still be interested in today.

“Then Anthony Pettis proposed that super fight, and I liked it because he was already a champion who has impressive knockouts,” Silva added. “Of course, it would be a great super fight.

“At this point of my career and for all my legacy it doesn’t make any sense to face new talents that are entering the game now. I don’t want to be a ‘step’ for the new generation. I want to face relevant champions for the sport. And definitely Pettis is a great challenge that will make me train a lot.”

Of course, the decision comes down to the UFC again and Dana White was not a fan of a Silva vs. Pettis matchup.

It will certainly be interesting to see who Silva eventually ends up facing in his return.

What do you think of Silva only wanting super fights? Who should he face next?