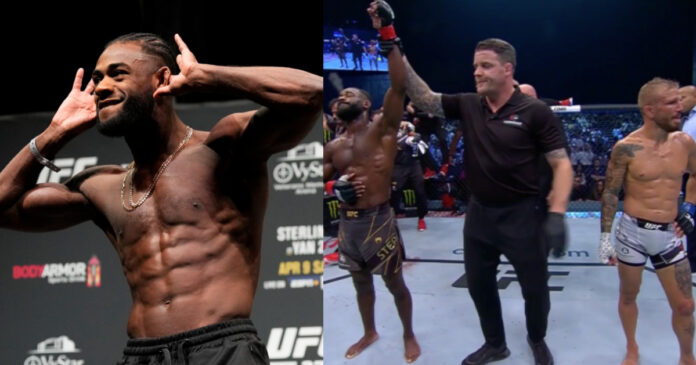 Before it had even gotten started, the co-main event between Dillashaw and Sterling was all but over. After Sterling shot for an early takedown, Dillashaw attempted to post using his left arm, and his shoulder popped out of its socket.

Dillashaw’s pain was evident, the former bantamweight champion was wincing in agony and at times almost looked as if he would verbally tap at; all while Sterling rained punishment down.

Dillashaw managed to survive till the second round, where his corner would massage his shoulder back into place. This wouldn’t last long though, Dillashaw would injure his shoulder again and would eventually be stopped by Sterling.

During the in-cage interview, Dillashaw revealed he had been suffering from the injury on the shoulder for the entirety of his fight camp, claiming it had popped out around 20 times during camp.

During his post-fight media scrum, Sterling was asked about Dillashaw’s injury claims but the reigning champion didn’t buy it.

“I understand the pain that he definitely had to deal with going through that, but he had the two shoulder surgeries during his suspension,” Sterling told reporters at the UFC 280 post-fight press conference. “I took him down, his shoulders were in the socket before the takedown. They were in the socket before the round ended as far as I’m concerned.

“I full mounted him, I rolled his arms up, I flattened him out, I’d like to think that I’m the one that caused it to come out the socket again. So, he can say whatever he wants, but I don’t think socket or not, that that fight wasn’t gonna get any better for him.”

Sterling would then comment on the character of Dillashaw, again bringing up Dillashaw’s previous bn for the use of PEDs.

“For him to go out and do that, I think it just kind of shows his personality,” Aljamain Sterling said. “And I said it before, for a guy who needs to do PEDs, they have a chink in the armor for this guy to lose and the first thing he went for was that. I’m like dude, you’re just gonna make it seem like your shoulder just came out by itself, brother? I like to think I had something to do with that.” (H/T MMAJunkie)

What’s next for Aljamain Sterling?