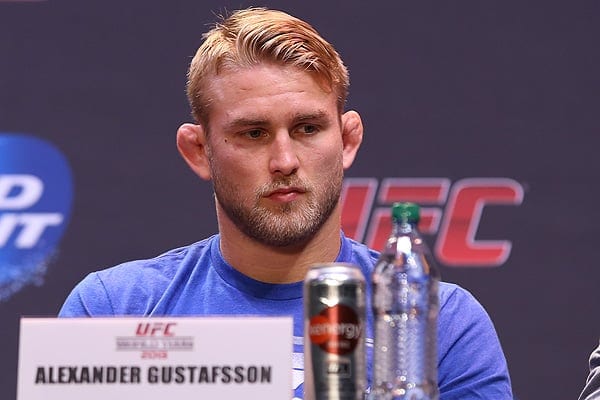 UFC 192 is just days away, and Swedish ‘Mauler’ Alexander Gustafsson will get the second crack at the belt he’s waited so long for. Daniel Cormier and his world class wrestling stand in the way of Gus taking home the belt, in a fight that pits a shorter grappler against the taller striker.

Many feel that Cormier’s Olympic pedigree wrestling will be the undoing, as it has for so many in the past, of Gustafsson’s mission to win. ‘DC’ is the self proclaimed king of the grind, but he faces an opponent in Gus who is no stranger to gritty affairs.

Talking to Mike Straka of MMA Noise this week, Gustafsson discusses the match up with Cormier:

“I match up great with him, he’s a wrestler, I’m a striker, he’s short and I’m tall. I’ve done my homework so I’m confident, it’s a great match up. DC is a grinder, he doens’t give up, he just keeps going. I’ve had a great camp so I’m confident and I’m feeling good.”

“I’ve been working with the best guys in the world, my takedown defense is better than ever. I’m not afraid of DC’s wrestling, it’s a 25 minute fight, maybe he can take me down one or two times. I’m ready.”

The topic of Jon Jones is on everybody’s lips this week, as he got given an 18 month suspension for his infamous New Mexico hit & run in April. Jones and Gus shared a fight of the year slugfest at UFC 165 back in 2013, and ‘The Mauler’ says he hopes ‘Bones’ comes back soon:

“I just hope he puts everything together and learns from his mistakes. I hope he comes back one day, he is the best fighter in the division and everybody wants to fight him, including me.”

“I was a little bit shocked (that I got a title shot) because I was coming off a loss. If the UFC wants me to fight for a title I’m not going to turn down an opportunity like that, it doesn’t grow on trees. It’s my mission, I want to take that belt and I want the rematch with Jon Jones and Anthony Johnson.”

Obvious fights for Gustafsson, should he win the belt, are ‘Bones’ and ‘Rumble’. Johnson put Gustafsson’s lights out in spectacular fashion when they fought earlier this year, made even worse for Gus by the fact it was in front of his home crowd.

The inevitable rematch with Jones will also be high on the priority list for the Swede, and is brought even closer to reality by ‘Bones’ getting away from his arraignment without any felony charges.

Stay tuned to LowKickMMA for more UFC 192 hype and coverage this fight week!