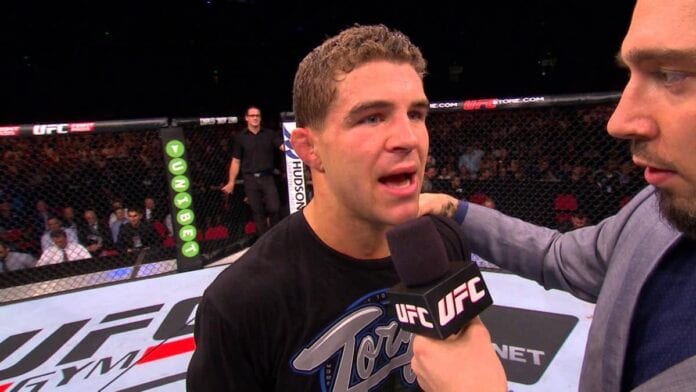 No. 13-ranked lightweight “Raging” Al Iaquinta was originally scheduled to face off with No. 11-ranked Bobby “King” Green at UFC Fight Night 71 on July 15, 2015 in San Diego, California. However, things got shaken up when Green was forced out of the bout due to injury, leaving “Raging” Al without an opponent momentarily.

Luckily for Iaquinta, the Long Island native may have actually gotten a bigger fight as former Strikeforce lightweight champion, multi-time UFC title challenger, and No. 5-ranked lightweight Gilbert “El Nino” Melendez has stepped in on short notice to fight Iaquinta.

“El Nino”, although coming off two loses in his last three bouts, is a huge name, and a chance for Iaquinta to prove himself in the division. Speaking with Submission Radio recently, “Raging” Al stated that he was ecstatic when Melendez stepped in, and that he’s ready for the opportunity:

“Oh man I was ecstatic. I was going crazy. First, you know going crazy in a bad way once I heard Bobby Green was out, and you don’t know who you’re going to get. He was an opponent ranked above me, so you know it has really good benefits to beat a guy like that.

“You always see guys on TV and you look at them, you size ’em up, and I’m like, I wonder how I’d do against these guys? And now I’m gonna get to find out. It was kind of like the same thing when I fought, really my last three fights. It’s the same feeling. It’s awesome to get in there with guys that you’ve always wondered, and now going in there, I know I’m ready. I’ve worked hard enough for it, so I’m ready for this opportunity for sure.”

In closing, “Raging” Al said that any way he sees it, he comes out with his had raised, and he believes it’s a chance for him to go out there and dominate:

“I think I’m gonna open a lot of people’s eyes man. This is a great fight for me to really put on a great dominant performance.”

Despite his recent struggles, there’s no doubt that Melendez is one of the best 155-pounders around. Can Iaquinta upset the odds and continue his rise up the lightweight rankings?