LowKickMMA.com
Home UFC News 6ix9ine Gets Into An Altercation With Drink Throwing Fan At UFC 266 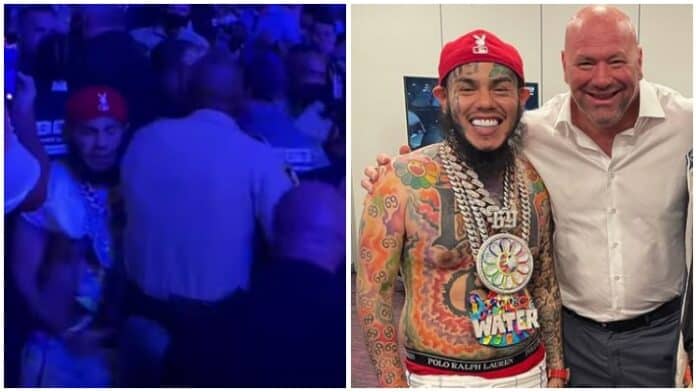 6ix9ine made an appearance at UFC 266 at the T-Mobile Arena in Las Vegas over the weekend.

The controversial rapper was met with taunts from a few unruly UFC fans during his entrance.

In the video obtained by TMZ, one man can be heard shouting, “Hey 6ix9ine, you a punk boy! You a pussy n*gga! You a bitch!” A drink is then thrown at 6ix9ine who quickly turns around and tosses a drink right back.  The man continues to mock and make threats to the recording artist. “I’ll beat the shit out of you punk boy,” he says. “Bitch! You a straight ho 6ix9ine! You a straight ho!

6ix9ine’s security team quickly step in to de-escalate the situation and the rapper dips off into the crowd and continued with his night which seemed to go pretty well and he even managed to get a picture with UFC head honcho, Dana White

According to eyewitnesses, the man who threw the drink was escorted out of the arena in handcuffs and was therefore unable the watch the epic fights that took place at UFC 266.

What do you make of this video showing 6ix9ine getting into an altercation with a fan at UFC 266?