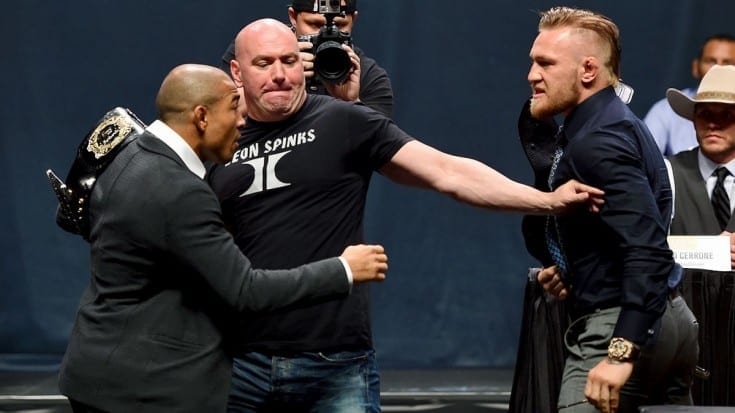 After shockingly surrendering his title in just 13-seconds at UFC 194 last December, former long-time featherweight champion Jose Aldo has claimed that he will not accept any other fight besides a rematch with the Conor McGregor or a shot at the title.

That opportunity was recently made available when McGregor’s scheduled UFC 196 opponent, lightweight champion Rafael dos Anjos, pulled out of the bout with a broken foot.

The UFC had called Aldo and offered him the short notice fight with the “Notorious” one, but apparently “Scarface” wasn’t in fight shape.

Recently speaking on the matter, the former champion said that this isn’t a ‘cock fight’, and that with ample time to train he’d fight anyone:

“”Any professional needs time to train,” Aldo told Ariel Helwani on Monday’s The MMA Hour. “It’s not a cockfight where I go there and put my rooster to fight. It’s a high-level sport, I’m going there to do my job. When I have time to train, it can happen at any time, anywhere.”

As far as what the future holds, Aldo actually said that he and the UFC have agreed on an immediate rematch between he and the Irish champion:

McGregor is slated to face off with Nate Diaz this weekend in Las Vegas, and has already confirmed that he will fight at July’s UFC 200 which seems to fit into Aldo’s schedule as well: