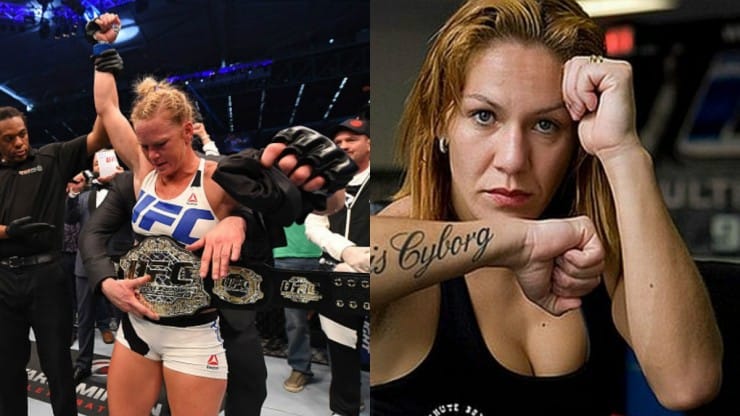 For the longest time, the most speculated fight in Women’s MMA was a potential super fight between “Rowdy” Ronda Rousey and reigning Invicta FC featherweight champion Cris “Cyborg” Justino.

However, any hopes of that fight actually coming to fruition have been put on the back burner for the time being given the fact that Rousey was brutally knocked out by Holly “The Preacher’s Daughter” Holm in the main event of November 14’s UFC 193, surrendering her UFC bantamweight title in the process.

Even if Rousey still held the title, however, it seemed unlikely that the fight would take place due to Rousey’s unwillingness to budge on the weight discrepancy between her and Justino.

“Cyborg” is a massive 145-pounder, and although she has attempted to drop down to bantamweight, it’s unknown how realistic that would be.

However, the weight discrepancy doesn’t seem to be an issue for the newly crowned champion Holm.

While the UFC doesn’t currently have a featherweight division, “The Preacher’s Daughter” admitted that she would be open to moving up to face the Brazilian slugger if the UFC indeed agreed on the idea (Via MMAFighting):

“I know with the UFC, they don’t have that division,” Holm said. “So, if that was something that they were going to put together, I’m not against it. I’m open to it.” “I’m not against options for other fights,” Holm said. “I don’t know how high I would go. I have fought at heavier weights in boxing. It kind of changes things with MMA, because there’s wrestling. Boxing, I think, is a little different, because you’re not dealing with somebody’s strength and weight on you as far as wrestling and grappling. But I do feel like I’m a bigger 135er. I don’t know. I guess I would just have to see if whatever would unfold if that was an option.”

As far as “Cyborg” goes, Rousey never seemed to have anything nice to say about her, but it seems to be different with Holm, who praised the Invicta champion:

“I love Cyborg,” Holm said. “She’s awesome. I finally got to get to know her this year. Whatever Cyborg wants to do, I support it. You want to stay at a heavier weight, you don’t want to go to 140? Whatever she wants to do, I’m all about it. I haven’t really thought about it too much.”

Holm is likely to rematch Rousey sometime next summer, but if she can retain the title, would you be interested in seeing her face off with “Cyborg”?