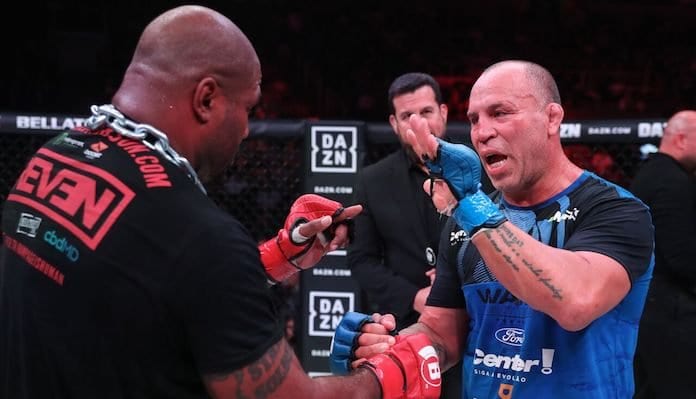 Following his TKO loss to Quinton ‘Rampage’ Jackson at Bellator 206, Wanderlei Silva speculates on the future of his fighting career.

Prior to his co-main event loss at Bellator 206, Silva was adamant that he would keep fighting win or lose. Despite the loss, it appears the “Axe Murderer” hasn’t shied away from his promise to keep fighting.

“I want to be more busy, I want to fight as soon (as I) can,” Silva said at the post-fight press conference. “I want to do better next time.”

Later still, Silva took to Instagram to echo his earlier sentiment and to proclaim that he and “Rampage” put on the fight of the night at the SAP Center.

“At 42, I can still do a few more fights,” Silva said. “I’m already thinking about the next one. Who could be my next opponent?”

“I’d like to thank all my friends and fans for rooting for me. Leaving the octagon acclaimed made me very happy and it gives me the strength to fight again. I represented our country with heart. Unfortunately, the win didn’t come this time. It was the best fight of the night at Bellator 206. At 42, I can still do a few more fights. I’m already thinking about the next one. Who could be my next opponent? Thank you for the support, brothers.”

Finding a suitable opponent for Silva may not be that difficult. Shortly before Bellator 206, fellow Brazilan Vitor Belfort took to social media to declare his bias towards his countryman. Belfort also mentioned a possible “soccer stadium” rematch of their 1998 encounter in Brazil.

With the loss on Saturday night (Sept. 29, 2018) Silva and Jackson are now tied at two wins apiece.

Let us know what you think. Should Silva and “Rampage” meet for the fifth time to settle the score once and for all?