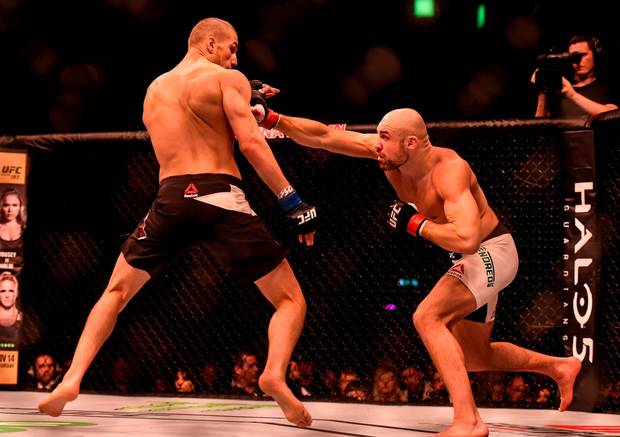 Red hot welterweight prospect Tom Breese took on the hometown slugger Cathal Pendred at UFC Fight Night 76 tonight (Saturday October 24, 2015), but it wasn’t to be the Irishman’s night. A team mate of Conor McGregor at SBG (Straight Blast Gym), Pendred had been making his way through the division with a 4-1 record thus far, but he simply met a superior and much larger fighter in the form of Breese at UFC Dublin.

All the help from the crowd in the 3Arena wasn’t enough to get Pendred out of the first round, as the Tristar trained Breese with Georges St-Pierre‘s trainer Firas Zahabi in his corner went to work. The opening exchanges saw the Irish native’s nose shattered by a straight left hand, and it was all down hill from there.

Breese comes in to the frame with high praise from the likes of GSP and Rory MacDonald, and it’s easy to see why. He is absolutely huge for a welterweight, he looked more like a light-heavyweight to be honest, and he made that size advantage count to the fullest extent.

Check out the highlights posted by the UFC Twitter account after the fight, and get ready to see more from Tom Breese as he scores the second consecutive knockout in his young UFC career: