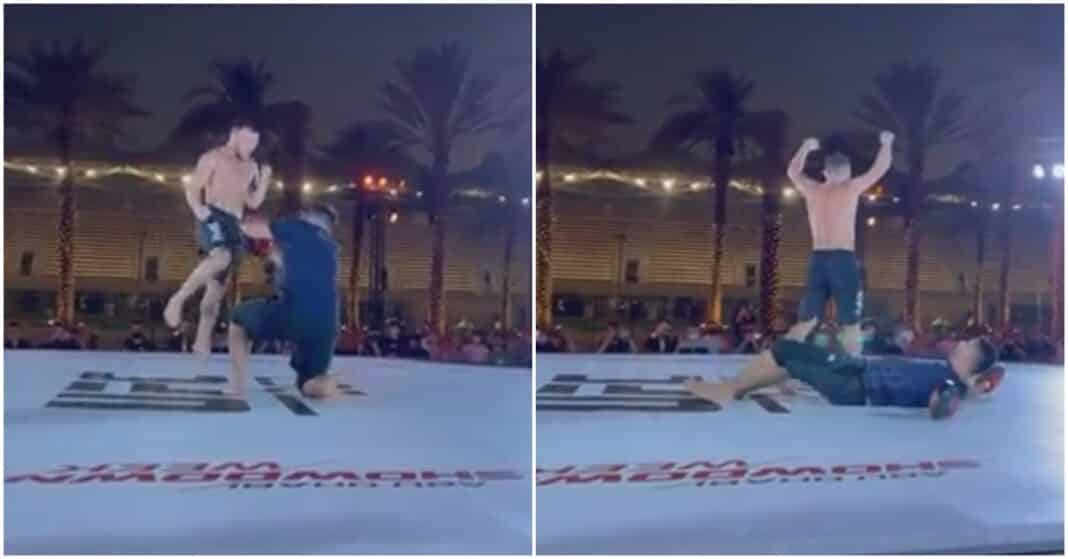 Petr Yan jokingly threw a flying knee at his grounded coach during his open workout ahead of UFC 267.

The former UFC bantamweight infamously became the first-ever champion to lose their title due to disqualification when he hit Aljamain Sterling with an illegal knee at UFC 259 earlier this year.

Yan was expected to rematch Sterling in Abu Dhabi this weekend but ‘The Funk Master’ recently pulled out of the fight to continue recovering from a recent surgery on his neck.

Petr Yan vs. Cory Sanhagen Is Your UFC 267 Co-Main Event

Cory Sandhangen replaces Sterling in the co-main event and will now take on Yan for the interim bantamweight title, with the winner going on to face the champ in an undisputed fight expected to take place in the first quarter of 2022.

Yan has consistently poked fun at Sterling since they fought and accused the American of milking the illegal knee because it was the only way he was leaving UFC 259 with the title.

On Wednesday, the streaking Russian fighter continued to troll his bantamweight rival while hitting pads with his coach at the UFC 267 open workouts. Yan lands a high kick before his pad holder drops to one knee and covers up. The former champ uncorks an illegal flying knee and his trainer plays dead on the mat as Yan wheels away in celebration – check it out below.

Do you think Petr Yan will become a champion again at UFC 267?