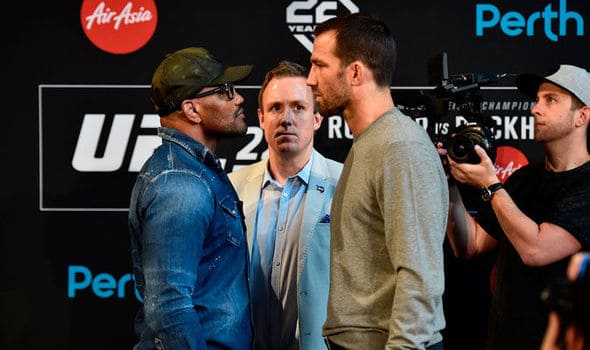 It wouldn’t be a UFC pay-per-view (at least as of late) without some last-minute drama, and unfortunately, this weekend’s (Sun., February 11, 2018) UFC 221 from Perth, Australia got just that.

Interim middleweight title challenger Yoel Romero missed weight by a gaping 3.3 pounds on the first attempt for his main event versus former champion Luke Rockhold and is currently using his two hours to make the 185-pound title fight limit. if he cannot, Romero will not fight for the interim belt while Rockhold still will.

Rockhold was understandably angered at Romero’s lack of professionalism, and the two promptly engaged in an up-close and heated staredown where things got physical and the fight almost started early. Check out the weigh-in and scuffle from Submission Radio here: