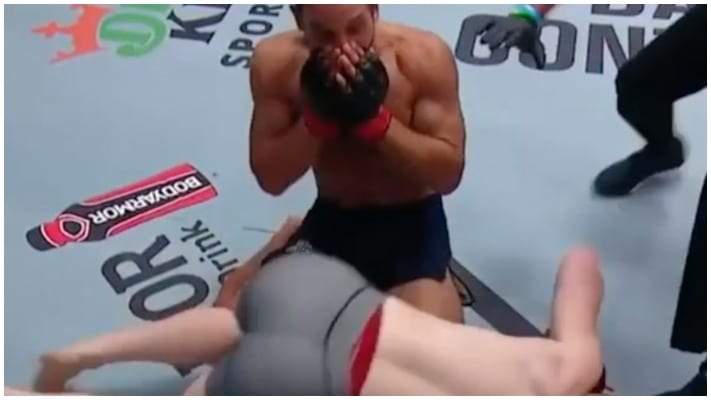 MMA prospect and UFC middleweight hopeful Joe “Bodybagz” Pyfer suffered a gruesome dislocated elbow injury on Dana White’s Contender Series. After an interesting night of fights on last night, the featured bout between Joe Pyfer and Dustin Stoltzfus at middleweight was starting to hit its stride when the two prospects entered into the clinch.

As Pyfer extended his right arm when they fell to the canvas, Stoltzfus’ weight on it forced Pyfer’s arm to bend in an unnatural way. The fight was waved off immediately by the referee due to a dislocated elbow with UFC president Dana White even showing himself with a visibly cringing reaction to the injury.

Clearly a tough injury to watch, can only hope this makes Pyfer come back stronger than ever with an impressive 7-2 record to his name.

Despite the ugly ending to this fight, Stoltzfus was awarded a UFC contract for his victory. As were the four other winners on the latest episode of Dana White’s Contender Series.

Check out the full results from DWCS Season 4: Week 2 below: