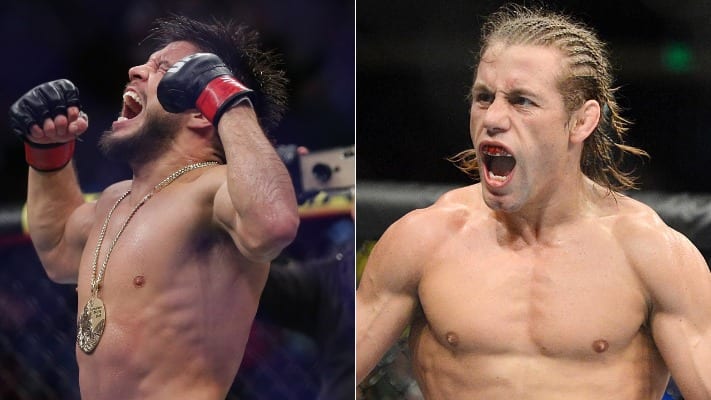 “Triple C” defeated Marlon Moraes in the main event of UFC 238 on pay-per-view (PPV). As a result, he is now the first mixed martial artist to have won a Gold medal and two UFC titles in different weight classes. After his big win, Cejudo took the opportunity to call out three big names. Those being Dominick Cruz, Urijah Faber, and Cody Garbrandt.

Speaking on “The Jim Rome Podcast” recently, Faber offered his response to Cejudo’s challenge. Here’s what he had to say (via MMA Fighting):

“First off, I’ve been a huge fan of Henry,” Faber said. “They call him ‘The Cringe’ because of the goofy stuff he does but you can’t deny that he’s got a mindset that is champion to the utmost. Gold medal as young as he did in the Olympics and then becoming a two-time champion, two different weight classes, two of the toughest weight classes – incredible. And you saw that champion mindset takeover.

“Moraes is a guy that is a champion as well so to see him getting outclassed in the first round and hit a mental switch to turn around and break a guy like Moraes speaks volumes. Things come up to matchups. I’ve never been broken in a fight. He’s a wrestler first that has really good standup as he’s shown of late, and an iron jaw and a great mindset but a matchup with him and Cody is super exciting. I would love to do a matchup.

“There’s nothing in the world that excites me more than fighting someone that could possibly be the best of all time in combat sports. How exciting is that for somebody who has got their own goal to do that? Then Dominick Cruz, you can never count that guy out. He’s a champion of champions as well. So I liked his callouts and I would love to see a fight with myself or Cody, or Dominick Cruz for Henry.”

Faber had initially retired from MMA competition back in 2016 after defeating Brad Pickett at UFC on FOX 22. However, he recently announced that he would be coming out of retirement to return to the Octagon. He will fight on the UFC Sacramento card against Ricky Simon on July 13.