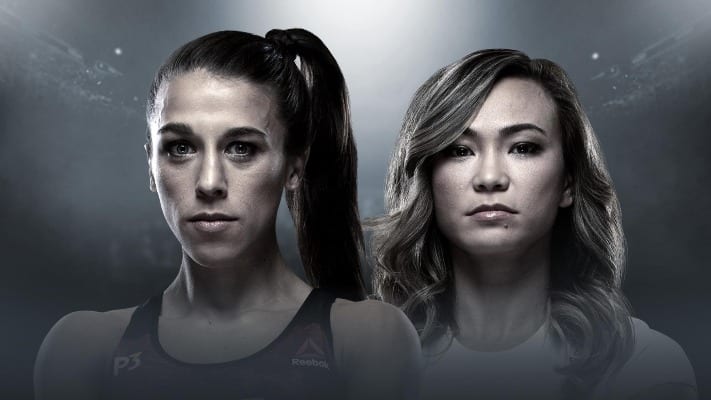 UFC Tampa will take place from the Amalie Arena in Tampa, Florida tomorrow night (Sat. October 11, 2019). In the main event of the evening, two of the best 115-pound female mixed martial artists in the world will go one-on-one.

Former division queen Joanna Jedrzejczyk will face off against “The Karate Hottie” Michelle Waterson, with the winner likely challenging for the title next. We here at LowKickMMA have compiled our UFC Tampa staff predictions for the main event. Check them out below.

This is going to be a true test for Waterson, who faces a fighter in Jedrzejczyk who only loses to truly elite competition. Waterson’s key to victory will be getting the fight to the ground, and using her jiu-jitsu to pick up a submission victory. However, Jedrzejczyk has shown to have phenomenal takedown defense, and some of the best striking in the division. I think the former champion gets the job done with a decision win. (Prediction: Joanna Jedrzejczyk)

I think this should be a good fight with Joanna no doubt having the striking and size advantage. But, where Waterson can have success is using her wrestling and jiu-jitsu to get this fight to the mat. However, I don’t think she will be able to, and Joanna will be able to piece her up for a decision win. (Prediction: Joanna Jedrzejczyk)

Joanna Jedrzejczyk has lost three of her last four fights but all those losses came against top fighters in Valentina Shevchenko and Rose Namajunas. Despite those setbacks, she is still one of the best female fighters in the UFC today, and in my opinion, on another level to Michelle Waterson. I expect her to comfortably outpoint Waterson and get the victory on Saturday night. (Prediction: Joanna Jedrzejczyk)

What do you think about our UFC Tampa staff predictions? Who are you picking?