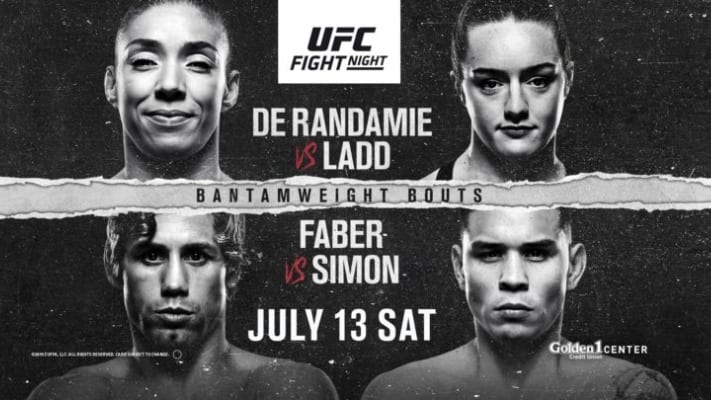 In the main event of the night, bantamweights Aspen Ladd and Germaine De Randamie will go head-to-head. The up-and-coming Ladd will get to test herself against a former UFC champion in de Randamie, who is one of the best female strikers under the promotion’s banner today.

Also, former multi-time UFC bantamweight title challenger Urijah Faber makes his return to mixed martial arts (MMA) competition after coming out of retirement. He takes on the young and impressive Ricky Simon. The Las Vegas-based promotion has compiled a great card for its return to Sacramento.

Aspen Ladd has been very impressive since making her UFC debut with three straight wins. A win over Germaine de Randamie would be a huge statement and the biggest win of her career. However, I feel de Randamie is just a level higher right now and should get the win to potentially set up a rematch with Amanda Nunes. (Prediction: De Randamie)

I’m actually fine with Urijah Faber coming out of retirement. Even though he lost two of his last three, I didn’t think he was necessarily past it. That said, Ricky Simon has looked really good of late and Faber’s last fight was nearly three years ago. I think Simon will get the biggest win of his career. (Prediction: Simon)

An interesting fight that really could go either way. Ladd has so much potential in her MMA career while GDR has proven what she can do inside of the Octagon. This comes down to age in the end as I think Ladd’s speed will be too much for GDR. Ladd closing in on range will be the key to victory for her whether that’s tagging the veteran with strikes or takedowns. Ladd gets it done by unanimous decision. (Prediction: Aspen Ladd)

As much as this would be a great story to have Faber return to the sport after years away and be victorious in his hometown, I don’t see it. The UFC didn’t give Faber an easy task but rather tossed him to a worthy challenger who is extremely dangerous. I see Faber keeping it close but Simon gets it done by unanimous decision. (Prediction: Ricky Simon)

This fight is a little harder to pick, considering de Randamie doesn’t fight too often; however, she’s much bigger than Ladd, and has a much more extensive background in kickboxing. This is an MMA fight of course, but with her size, and her wrestling defense has improved drastically since we’ve first seen her, I think she takes a decision over the younger Ladd. (Prediction: Germaine de Randamie)

I for one believe the youth will play a big factor and Simon will win via decision. I could certainly see Faber winning, but Simon has been active recently. He has won a lot recently, and he’s not going to let this opportunity to beat a legend pass him by. (Prediction: Ricky Simon)

This is a really intriguing bout and a fight that could go many ways. Either Aspen Ladd will use her wrestling to take down de Randamie, or the former featherweight champ will use her kickboxing to keep the prospect at range and piece her up. However, I think Ladd is the real deal and will win this fight by stoppage in the fourth or fifth round. It will be a close fight, but one in which Ladd will get her hand raised. (Prediction: Aspen Ladd)

Ricky Simon is not the person Urijah Faber should have returned against. In my eyes, he is one of the top prospects at bantamweight, and at 26, will be able to keep up the pressure and have a hard pace against the Hall of Famer. How Faber looks in this fight will be telling on if he should have returned. But, I think Simon dominates this fight as he keeps it standing and either wins by unanimous decision or by TKO in the third round. (Prediction: Ricky Simon)