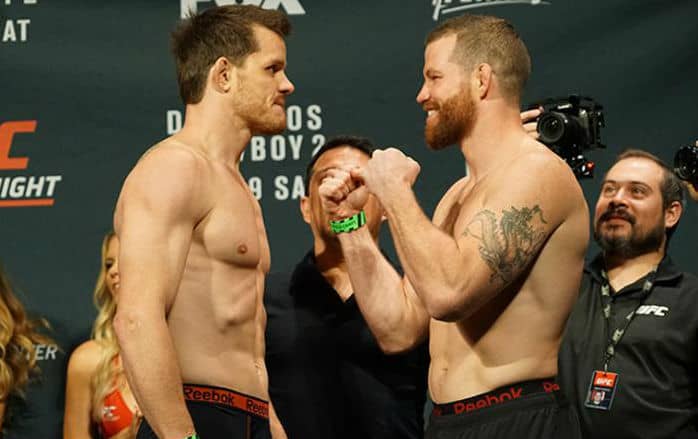 It was once again fight day here at LowKickMMA, and the talent on display tonight (Saturday, December 19th, 2015) will come from in the form of UFC on FOX 17. Headlining the card are Rafael Dos Anjos and Donald Cerrone, but there’s a whole bunch of great fights also taking place on the preliminary section of the card.

Myles Jury and Charles Oliveira met in a featherweight bout at UFC on FOX 17. Olivera scored an early takedown and got the back of Jury, but could not do anything with it. Moments later, Olivera locked in a guillotine choke and won the fight.

C.B. Dollaway and Nate Marquardt met in a middleweight bout at UFC on FOX 17. Marquardt took some good shots from Dollaway in the first round but stayed in the fight. Then in the second round, Marquardt knocked him out at the beginning of the second round with a counter strike. Dollaway ran at him and into a right hook. That’s it, folks.

Sarah Kaufman and  Valentina Shevchenko met in a women’s bantamweight bout at UFC on FOX 17. A very close fight that saw Kaufman control the fight with her striking while Shevchenko controlled the fight with her grappling and her takedowns. Shevchenko took the fight on a week’s notice, and that was good enough to get the win by split decision.

Tamdan McCrory and Josh Samman met in a middleweight bout at UFC on FOX 17. An even fight through the first round, but things started to shift in the momentum of McCory in the second round. This was a grappling bout that saw men have their moments in the fight. The end of the fight came in the third round when McCory locked in a triangle choke and Samman tapped out.

Danny Castillo and Nik Lentz met in a lightweight bout at UFC on FOX 17. Lentz wore down Castillo in this fight with his constant pressure, grappling, and amazing takedowns. Castillo was exhausted starting in the second round, and Lentz picked him apart until the end. Lentz won the fight by split decision.

Jim Alers vs. Cole Miller opened the Fox Sports 1 preliminary bouts in a featherweight bout at UFC on FOX 17. This was a very fun fight as long as it lasted. The first round saw a mixture of strikes and was very entertaining. In the second round, Alers poked Miller in the eye. Miller said that he could not open his eye, and the fight is called. It ended in a no-contest.

Leon Edwards and Kamaru Usman met in a welterweight bout to finish off the UFC Fight Pass preliminary card at UFC on FOX 17. Usman dominated the fight with his grappling and takedowns. Edwards was no match for Usman in this fight. Usman won the fight by unanimous decision.

Hayder Hassan and Vicente Luque met in a welterweight bout at UFC on FOX 17. This one did not last long as Luque tagged him then went for an anaconda choke and ended the fight in the first round.

Opening the UFC Fight Pass prelims for UFC on FOX 17 was Luiz Henrique vs. Francis Ngannou in a heavyweight bout. The first round was skippable to say the least. Henrique took him down early and worked him over with strikes. With the time that they had left in the round, they clinched. In the second round, Nganou finished the fight with an uppercut that put Henrique to sleep.

Here are the quick results from the prelims: