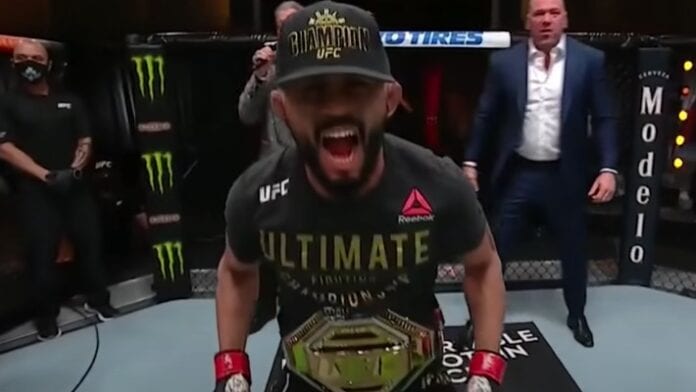 Despite all the changes, UFC 256 promises to be one heck of a card.

The last pay-per-view event of the calendar year takes place December 12 and will see Deiveson Figueiredo defend his flyweight title against Brandon Moreno in the headliner.

In the co-main event, Tony Ferguson is back as he looks to return to the win column against the surging Charles Oliveira in a pivotal lightweight bout.

And on Thursday, the UFC released the official poster for the event featuring both those fights.

Other standout bouts on the main card include a lightweight encounter between Renato Moicano and Rafael Fiziev, a middleweight bout between Kevin Holland and Jacare Souza and a heavyweight collision between former champion Junior dos Santos and Ciryl Gane.

All in all, it’s a stacked card which is all the more impressive when you consider two title fights in a women’s featherweight clash between Amanda Nunes and Megan Anderson and a bantamweight bout between Petr Yan and Aljamain Sterling were scrapped from the card.

What do you think of the card? And what are your thoughts on the official UFC 256 poster?