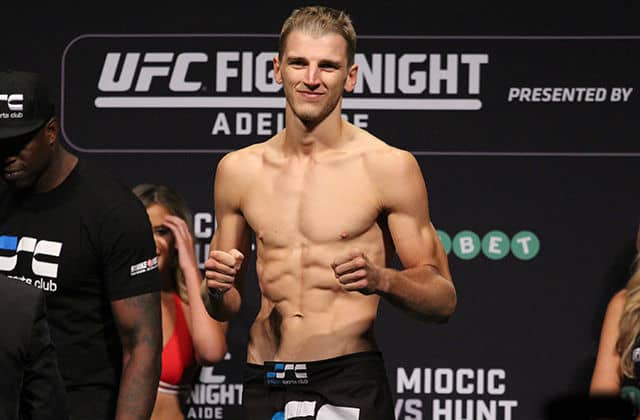 It was fight day here at LowKickMMA, and the talent on display tonight (Saturday October 3rd, 2015) will come from the in Houston’s Toyota Center, in the form of UFC 192. Headlining the card are Daniel Cormier and Alexander Gustafsson, but there’s a whole bunch of great fights also taking place on the preliminary section of the card.

Daniel Hooker met Yair Rodriguez in a featherweight bout to close the preliminary card on FOX Sports 1. This was a solid fight that saw Rodriguez control most of the action not only with his stand up, but as well as his takedown ability. Rodriguez won the fight by unanimous decision.

Alan Jouban met Albert Tumenov in a welterweight bout. Tumenov rocked Jouban early in round one with a head kick, and then a few minutes later he finished the fight with a sweet head kick followed by a straight left to win the fight.

Islam Makhachev met Adriano Martins in a lightweight bout. Both fighters were aggressive in the early going. Martins with a huge right hook that dropped Makhachev for a giant knockout in the first round.

Angela Hill vs. Rose Namajunas in a women’s strawweight bout opened the FOX Sports 1 preliminary bouts. This one did not last long. Namajunas got the takedown early in the first round and got the back of Hill. Namajunas locked in the rear-naked choke for the win.

Sage Northcutt met Francisco Trevino in a lightweight bout to finish off the UFC Fight Pass preliminary card at UFC 192. Northcutt lived up to the hype in his UFC debut. Trevino attempted a wild kick, Northcutt side stepped it and blasted him with strikes. Northcutt finished the fight on the ground. Impressive.

Chris Cariaso met Sergio Pettis in a flyweight bout at UFC 192. Pettis dominated the fight with his nice striking, but really on the ground. He hurt Cariaso in the first round, but Cariaso survived. The judges gave Pettis the win by unanimous decision.

Opening the UFC Fight Pass prelims was Derrick Lewis vs. Viktor Pesta in a heavyweight bout at UFC 192. Lewis looked rocky at first but then turned it around with just one minute remaining in the second round with his strikes. Entering the third round, Pesta shot in on a takedown but was stuffed. Lewis landed some big shots in the mount that ended the fight.

Here are the quick results.