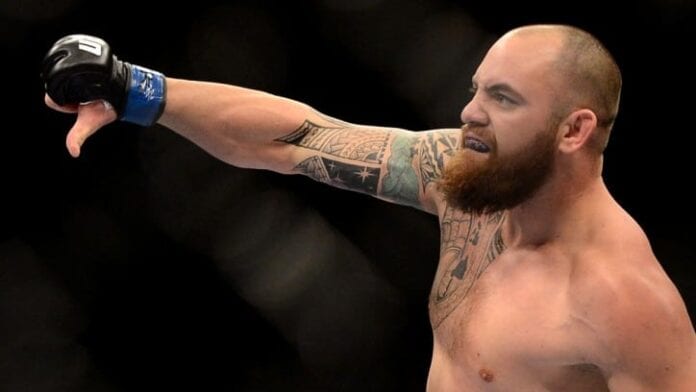 UFC women’s bantamweight champ Ronda Rousey has quickly risen to the enviable position of MMA’s biggest star, but recently she’s apparently become embroiled in some rumors that will bring a different and much less desired kind of notoriety.

There’ve been whispers that the ultra-popular ‘Rowdy’ has been dating UFC heavyweight Travis Browne, who himself is under fire and investigation for allegedly beating his wife Jenna Renee Webb. The rumors are just that although the following picture of the two dining out did surface recently. Browne didn’t look all too happy in the photo (courtesy of Bloody Elbow):

From Instagram. Guy takes a pic of his daughter. Browne is PISSED! pic.twitter.com/FNQnC0zy1v

“Hapa” is currently suspended from competition while the UFC completes their investigation of the supposed domestic violence incident, where charges were not pressed against him because his wife did not want his ability to see his children to be taken away. His wife then confirmed on Twitter that the two were indeed dating, and that she was ’more ashamed’ of Rousey because she would eventually see Browne’s true colors:

@noochsig I’m pretty disgusted…more so in her. But I’ve known this for a while. — Jenna Renee (@JennaReneeFit) August 24, 2015

@jenfoucheris I expected more from her. She should be ashamed of herself

@noochsig honestly it’s only a matter of time that she sees his true colors. — Jenna Renee (@JennaReneeFit) August 24, 2015

@noochsig let’s hope it doesn’t go there but if it does she chose to be w/ a married man undergoing investigation for DV. I did my part.

@noochsig who’s the #DNB now with a married man who beat his wife. #classy

While it’s no surprise to see Browne’s wife angry at Rousey for dating a married ma with children who supposedly beats his wife, nothing has been made official and Browne is still under investigation. But it sounds like this story has several sides to it, so stay tuned to LowKickMMA.com for all of the developing details.