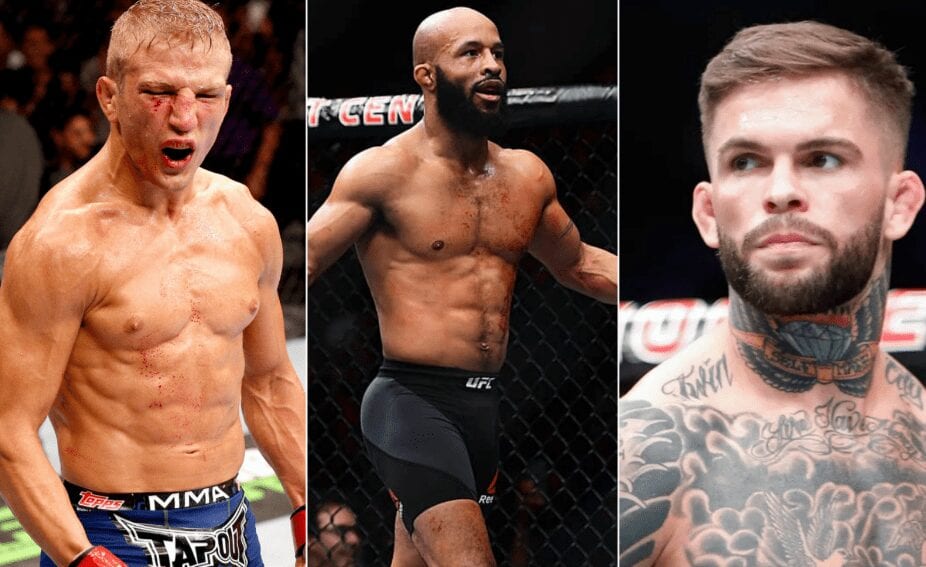 If you recall, their first fight went down at the UFC 217 pay-per-view event at Madison Square Garden in New York City in November where Dillashaw finished Garbrandt to win back the bantamweight title.

Now, the promotion has booked the rematch between these two fighters for the upcoming UFC 227 event.

Johnson and UFC President Dana White frequently exchanged words in early 2017 over this bout. The reason for that was due to Johnson not being receptive to a fight with Dillashaw even though White and other UFC officials were pushing for it last year. White came out and mocked Johnson for taking it.

This led to Johnson firing back and claimed that White threatened to shut down his entire division. White denied that and gave Johnson the fight he wanted, which was against Ray Borg that was almost guaranteed to do low PPV numbers.

Apparently, though, that’s water under the bridge as White has moved past his issues with Johnson.

“I don’t really know,” Dillashaw said (transcript courtesy of MMA Fighting). “I think that’s a good question for Demetrious Johnson. Maybe he wanted some guaranteed money. Maybe he wasn’t willing to gamble on himself on the pay-per-view numbers. But as far as I was concerned, the fans wanted it, the UFC wanted it. Everyone knows I wanted it. I respect Demetrious Johnson as a person and as an athlete and that’s kind of why I was chasing him down. He’s got that target on his back. He’s got that pound-for-pound spot that I want to come in and take. Not only to make the big bucks on a big fight, but for the legacy. Chasing that spot down. So really I think it’s a question for him why it didn’t really happen.”

Now, Johnson will defend his flyweight belt against Henry Cejudo at the UFC 227 card.

“I was chasing that Demetrious Johnson fight,” Dillashaw said. “It just really didn’t seem like it wanted to work itself out. So I feel like the next biggest, hyped up fight was Cody. The one that kind of made the most sense for the attention. There was a lot of drama behind it, so run it back.”

“He’s got that spot and I’m looking to take it,” Dillashaw said of Johnson. “Our fight is ahead of us that we gotta worry about. And we’ll talk about it after the fight.”

“I would love to do it at ’25, because I don’t want the excuse of me being the bigger man,” he said. “‘Oh, the only reason why he beat me is because he’s bigger than me.’ I can make your weight, I’m not bigger than you.”

The UFC 227 pay-per-view event is set to take place on August 4, 2018, at the Staples Center in Los Angeles, California.