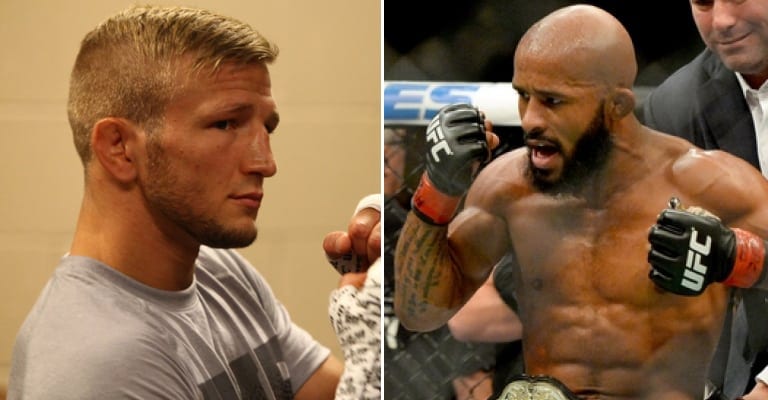 Former UFC bantamweight champion TJ Dillashaw is expected to challenge current titleholder and bitter rival Cody Garbrandt in the coming months, but the duo was originally set to meet at UFC 213 last month in Las Vegas. A back injury suffered by Garbrandt, however, forced the fight to be put on hold.

Once it was clear that “No Love” was unable to compete, Dillashaw began campaigning for a flyweight title fight with dominant champion Demetrious Johnson, but “Mighty Mouse” never appeared to be interested in the fight.

According to Dillashaw, who recently spoke with MMAJunkie, Johnson is ‘too worried’ about breaking the record for the most consecutive title defenses, which he’ll attempt to do at UFC 215 next month against Ray Borg:

“This is the fight I ultimately wanted,” Dillashaw said, referring to his fight with Garbrandt. “That was kind of like going for a consolation prize. If I couldn’t get my belt at (135), I want a belt. And I felt like it was a big, hyped-up fight I could’ve pushed with Demetrious. Unfortunately, he did not want that. Unfortunately, he’s too cerebral of a fighter.”

“He knows that’s not a good fight for him and wouldn’t accept it,” Dillashaw continued. “He’s real worried about this record he needs to break. Go ahead and let him do that, I guess.”

In the end, Dillashaw will get the fight he truly wanted, as him and Garbrandt are expected to face-off at UFC 217 on Nov. 4, 2017 at Madison Square Garden in New York City.

“Fingers crossed nothing happens. I’m ready tomorrow, man,” Dillashaw said. “I’ve been staying in the gym. That’s what I love to do. I feel lazy when I’m not in the gym. So, yeah, I’m ready to go at 217. And just the fact to be able to fight in Madison Square Garden seems like a huge event.”

Are you excited to see Dillashaw finally meet Garbrandt, or would you have preferred to see him paired against “Mighty Mouse”?