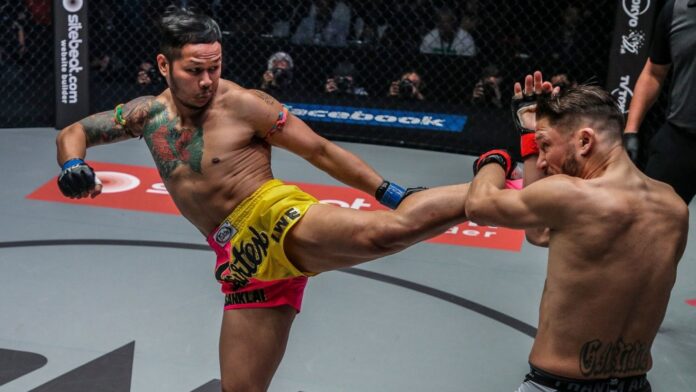 A muay tae fighter is a kicking specialist, which means they combine beauty with brute force.

These athletes are beloved by purists and casual fans alike thanks to their supreme technical skill, and the stamina to go kick-for-kick in an all-out war in the ring.

It’s a popular style because kicks are so versatile. They can be used to control range, break opponents down to the legs and body, or KO them with a head kick.

Choosing just five from the annals of the art of eight limbs is tough, but these five fighters made their mark on the sport more than perhaps any others.

When we talk about the top Muay Thai fighters, it’s hard to look beyond athletes from the “golden age” of Muay Thai and beyond.

Before that, there is not much footage to go by, but in the case of muay tae stylists, it’s impossible to overlook the man known as the hardest kicker in the history of the sport.

The impact of his strikes was said to reverberate around arenas, and many opponents would rather retreat than engage with him. It’s easy to understand why – he famously broke both of Sompong Charoenmuang’s arms in a legendary fight.

Apidej was also earned the moniker “The Man Of Seven Titles” because of his collection of belts in Muay Thai and western boxing. As well as his collection of hardware, he retired with a record that is reported to be an astounding 350-10-1.

To cap it all, Apidej was declared a national hero by the King of Thailand and dubbed “Muay Thai Fighter of the Century.”

From one “Golden Leg” to another, Pud Pad Noy Worawoot was the supreme kicker of the 1970s, and his legend endures to this day.

As a southpaw stylist, Pud Pad Noy’s left leg was his moneymaker. His laser-guided round kicks tore through his opponents’ guards, and he was renowned for his head-kick KOs.

His lead leg was not bad either. He could generate a ton of power without switching, but when he did, his right shin could cause almost as much damage as his left. Plus, he had a sharp teep that he could use to pick opponents apart from behind his jab.

Pud Pad Noy devastating striking allowed him to collect multiple Lumpinee Stadium belts, and his effectiveness did not seem to wane even as he moved up through the divisions.

Never one to back down from a challenge, moved up to a career-high 144lb at the height of his fame and success to take on Apidej. It was an era-defining match, southpaw vs. orthodox, youth vs. experience.

The older master may have had a size advantage, but Pud Pad Noy’s offense was on point and he showed tremendous heart to survive a late surge to get his hand raised. The torch was well and truly passed.

Some fans argued that Buakaw Banchamek does not rank as highly as other nak muay because he never won a title at Lumpinee or Rajadamnern Stadium.

However, that would ignore the countless other belts “The White Lotus” has collected in his iconic career and the impact he has had on Muay Thai around the world.

Buakaw entered the 2004 K-1 World MAX grand prix as the lone Thai, and he put his country and martial art on the map with three ferocious performances in one night.

The final match against Japanese icon Masato was an exhibition of exemplary kicking at blinding speed.

Buakaw hammered his rival’s body, kicked his legs out from underneath him, and used his teep like a battering ram to claim kickboxing’s most revered prize.

By the time he won that title again two years later, Buakaw was the Muay Thai fighter in casual fans’ eyes. He cemented that status with WMC, WBC, and Kunlun Fight belts, to name just a few, and he is still going strong – two decades after he first emerged as an elite competitor.

Yodsanklai Fairtex is renowned for having one of the most devastating round kicks in modern Muay Thai.

His moniker, “The Boxing Computer” is not a reflection of his punching skills (though they are incredible, too), but an illustration of his perfect technique.

Yodsanklai could zero in on a target and hit his mark over and over again. He was also known to have unmatched power, so countless opponents were broken down by a barrage of shins to the body.

The great John Wayne Parr said Buakaw might have been faster, but no one could match Yodsanklai’s best weapon from his southpaw stance.

Like Buakaw, Yodsanklai is just as revered for his role in the worldwide explosion of Muay Thai. The man who would become known as “The Hero” was the star of The Contender TV series and went on to win a king’s ransom of gold across five continents.

Plus, for the purists, he claimed a pair of Lumpinee Stadium belts before he became an international superstar.

Before Yodsanklai, there was Sakmongkol Sithchuchok, who was known to have the most powerful left leg in Thailand in the “golden era” of Muay Thai during the 1990s.

Aggressive opponents were stopped in their tracks by his thudding roundhouse, and sent flying backward by his spear of a right teep.

Sakmongkol made a name for himself when he debuted at Lumpinee Stadium at the age of just 12, and then by beating some big names throughout his teens. He took out Dutch pioneer Ramon Dekkers when he was 18 (Dekkers was 22).

A Lumpinee Stadium World Title came a few years later, and he also garnered a reputation as one of the most exciting fighters in Thailand.

His seven-fight series against Jongsanan Fairtex and Orono Pro Muang Ubon went into the history books as some of the best of all time.

Sakmongkol later traveled around the world as Muay Thai’s popularity grew, and he took out some of the top fighters from outside Thailand, including Danny Bill, Perry Ubeda, and John Wayne Parr.

He retired with an outstanding pro record of 231-19-4, and he showed the versatility of his kicking game by transitioning to karate competition. His success continued in a new discipline as he won the WKO World Championships in 2009 and 2010.