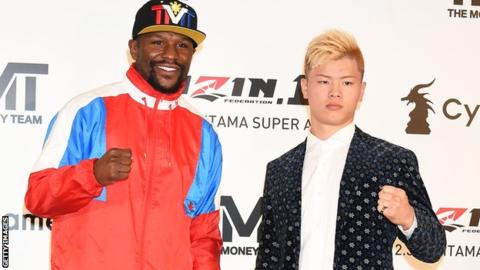 RIZIN 14 results have surfaced online after the event wrapped up to end 2018. This event took place on December 31st from the Saitama Super Arena in Saitama, Japan.

It was an important event for the promotion as Floyd Mayweather vs. Tenshin Nasukawa served as the headliner. problem with that was for those who wanted to watch this fight was the fact that it wasn’t televised in most countries. Instead, the rest bouts on the card were broadcasted.

A few months ago, it was made clear by RIZIN that this isn’t a fight or a boxing contest but rather an exhibition as the result of this bout will not be put on their records. It will see a three-minute, three-round match with full contact allowed.

The finish of the main event saw Mayweather knock him down 3 times in 2 minutes and then Nasukawa’s corner threw in the towel. In this bout, Mayweather toyed with him throughout and never in danger.

Tofiq Musayev def. Nobumitsu Tyson via TKO at 1:19 of R2