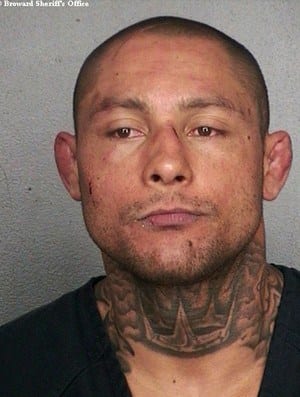 Former UFC light heavyweight Thiago Silva last fought in October of 2013. Silva never really reached the top of the ladder, but he remained relevant in the light heavyweight picture for quite a few years. He was actually riding a two fight win streak inside of the octagon until he ran into some trouble with the law.

Silva was arrested last February after an incident took place at Pablo Popovitch’s Mixed Martial Arts Academy in Oakland Park, Florida involving Silva and his wife Thaysa. Police stated that Silva arrived at the martial arts school and threatened his wife and Pablo Popovitch with a gun before fleeing back to his home. Back at his home, S.W.A.T members surrounded his house for four hours before the former fighter finally came out. He was then tasered and taken into custody. Originally, Silva was being charged with two counts of felony attempted murder, but that was eventually reduced to two counts of aggravated assault with a firearm.

This was also not the first domestic issue between Silva and his wife, as there have also been reports of an incident where he supposedly stuck a revolver in Thaysa’s mouth. His wife then obtained a protective order against him. After being arrested, Silva was denied bail.

However, after sitting in jail for quite some time, Silva is a free man as of today (September 4, 2014). He was released from jail after prosecutors his wife, Thaysa, to be “uncooperative” Investigators have also stayed that she has likely moved out of the country.

Despite being let out of jail, you will never see Silva back in the octagon. UFC president Dana White confirmed he will never fight for the promotion again. On top of his legal problems, Silva also had issues with the UFC which most definitely aided this decision. He tested positive twice for marijuana in post-fight drug tests during his UFC tenure.