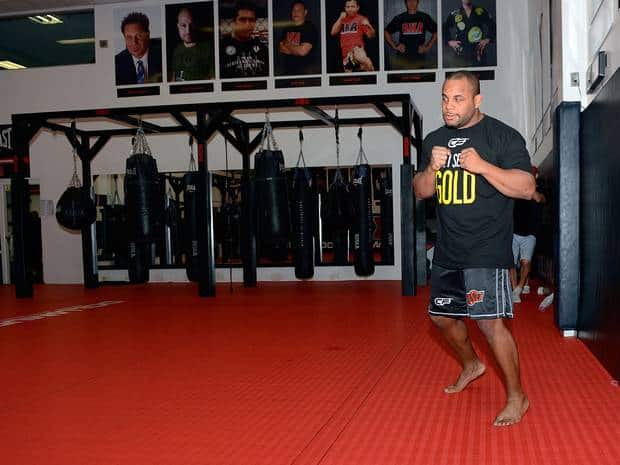 Top UFC light heavyweight contender Anthony “Rumble” Johnson had his chance at glory when he battled former Olympian Daniel “DC” Cormier for the vacant 205-pound strap last May, but he ultimately came up short.

Cormier, who submitted Johnson, is now the undisputed champion and recently edged out a hard fought split-decision victory over Alexander Gustafsson to cap off an insanely busy past few years for the 36-year-old.

Now expected to meet returning former champion Jon “Bones” Jones in a highly-anticipated rematch, “DC” has requested a bit of time off, something that “Rumble” doesn’t feel as if he’s earned:

“I don’t know why he would say he wants six months off; maybe he wants time to heal, spend more time with his family and train more and just perfect his craft – I don’t know,” Johnson told MMAjunkie. “Do I see it as being selfish? No. But I want to say this: I don’t feel like he’s earned it enough to say, ‘I need six months off.’ If Jon was still the champ after like two years of whooping ass and said, ‘Dude, I need six or eight months off.’ You deserve those six to eight months off because you put in the time and the work.”

Although not necessarily saying that Cormier hasn’t put in the work, Johnson said that the champion should look to stay active as it’s unknown just how much longer he’ll be around:

“(I’m) not saying Daniel didn’t do that, but I think he should keep grinding. In my opinion that’s what Daniel does. He should just keep grinding before it gets too late because there’s a lot of hungry guys coming up. It’s just a matter of time before his body is going to say, ‘No more.’ He needs to stay active.”

Although he ended up scrapping with “DC”, Johnson was originally set to meet Jones at UFC 187. However, after being arrested on felony charges, “Bones” was stripped of his title and suspended indefinitely. With the ex-boss now reinstated, “Rumble” is even hungrier, as he still considers Jones the rightful title holder:

Since losing to Cormier, Johnson has picked up an impressive finish over Jimi Manuwa and is now set to take on surging contender Ryan Bader this January in what could be considered a title eliminator. That being said, “Rumble” still hopes to face Jones one day, a fighter he admits is tough to plan for:

“With Jon coming back and when we do fight for a title, I always feel like I have the upper hand every fight, but Jon is tricky,” Johnson said. “He’s long, he’s athletic, and he catches you with weird kicks and weird elbows at different angles. You just have to be ready for Jon Jones. That’s the guy you can never really plan for. You just have to go in there and fight his ass.”

How would Johnson stack up against “Bones”?