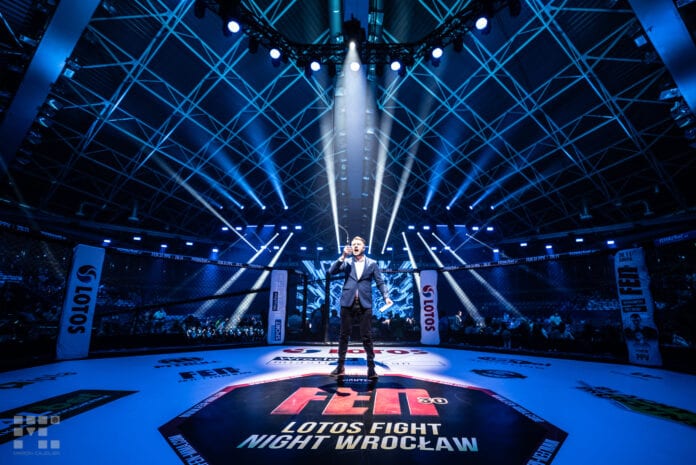 Each year the sport of mixed martial arts draws in new fans throughout the globe. Outside of the USA, one of the countries where MMA has a fervent following is Poland. Polish MMA is undoubtedly on the rise at the moment. Jan Blachowicz holds the UFC light heavyweight crown, and local promotions like KSW have developed a worldwide fan base.

Now a new flag bearer for Polish MMA is set to make its mark on the international scene. Founded in 2013, Fight Exclusive Night (FEN), is one of the country’s leading MMA promotions. This Saturday, Nov. 28, the Wroclaw-based company will stage FEN 31, the most significant event in the promotion’s history. FEN 31 will feature three title fights and will be available worldwide as a PPV.

Headlining the event will be a featherweight clash between local rivals Daniel Rutkowski and Adrian Zielinski. Adding an extra dose of drama to the matchup is the fact that Rutkowski and Zielinski will compete for not only the FEN Featherweight Championship but also the Babilon MMA Featherweight Championship. In a crowded MMA landscape, FEN is going all out to produce a memorable show that will attract a new audience to its brand.

“This is our second event in PPV, and that’s why we’ve put together the best fight card in the history of FEN federation, “says company spokesperson Jakub Borowicz.

“We are developing every year. In addition to promoting MMA, we also try to cultivate the traditions of K-1. Despite the difficulties due to the pandemic, we are organizing our 5th event of the year, which proves our strength.”

FEN has built up a roster stacked with top local talent, but the organization’s growth has allowed it to bring in international fighters. FEN 31 will see athletes from around the world including France and Denmark entering the cage.

“I think the Polish MMA is a leading force in Europe,” Borowicz commented.

“We try to attract foreign fighters to our events, but we must ensure the right quality. Recently, a former FEN fighter, Guran Kutateladze, defeated former two-division KSW champion Mateusz Gamrot at UFC Fight Night: Ortega vs. The Korean Zombie.

“This year, we were supposed to organize the first event outside of Poland, but the pandemic stopped us. We hope to come back to these plans as soon as possible.”

The eight-bout card contains several exciting matchups, but according to Borowicz, aside from the main event, there are two bouts fans should keep an eye on.

“I would pay particular attention to the fight between Adam Kowalski Kowalski and Marcin Wojcik. Kowalski has always been an underdog in his fights, but to everyone’s surprise, he has won his [last two] bouts and is now a contender for the light heavyweight belt.

“I would also closely follow the fight of Kacper Formela, who has fought two fights in the FEN federation, and both times received a bonus for the best fight of the evening.”

For those MMA fans wanting to check out FEN 31. The event will kick off this Saturday at 2 pm (EST). Below is the full fight card and the event can be purchased by clicking on the FEN 31 PPV link