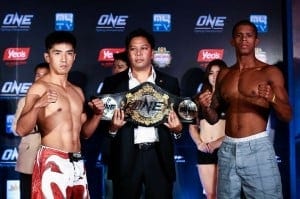 One FC 20 went down Friday (September 12, 2014). The rising Asian promotion hosted their Rise of the Kingdom event at the Koh Pich Theatre in Phnom Penh, Cambodia on Friday.

In the main event of the evening, Adriano Moraes and Geje Eustaguio went at it for the inaugural One FC Flyweight title. The main card features a plethora of finishes and gave fans an exciting night of fights.

Check out the full OneFC 20 results below: