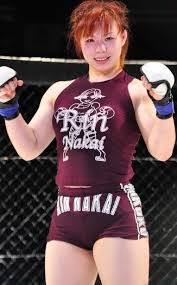 Former Strikeforce bantamweight champion and UFC 135 pound title challenger, Miesha “Cupcake” Tate, could be heading to Japan for her next fight.

As reported on this evening’s edition Of UFC Tonight (June 18, 2014), the senior circuit is currently in the midst of putting together a match between the No. 3 ranked Tate, and undefeated Japanese fighter Rin Nakai.

Nakai is 16 – 0 – 1 (Draw) in her eight year career (turned pro in 2006) and has fought in a number of different MMA promotions, with her last seven fights coming in Pancrase.

Nakai is 27-years-old, stands 5’1”, and by the audit of some WMMA rankings lists, sits as high as No. 10 in the world standings.  She carries a 63% finishing rate – 4 T/KOs and 6 submissions – and appears, by view of her accomplishments, to be well-rounded. For the record, Nakai has never fought for a title and has never gone more than three rounds in a fight.

The fight will apparently take place at the UFC’s September 20 card in Japan and would likely as not, see the duo featured as the show’s co-main event. However, as Nakai is not currently signed to the brand, the promotion must first come to terms with the fighter before finalizing any Tate vs. Nakai plans.

As for Tate, she had been looking for fights with Gina Carano, Sarah Kaufman, and Cat Zingano. However, those matches have failed to materialize.

If the UFC is looking to do the Tate vs. Nakai match in Japan for late September, then fans shouldn’t be surprised to hear about the promotion signing Nakai in the coming days, and putting to bed any paper work that might hold up the UFC’s hype machine.