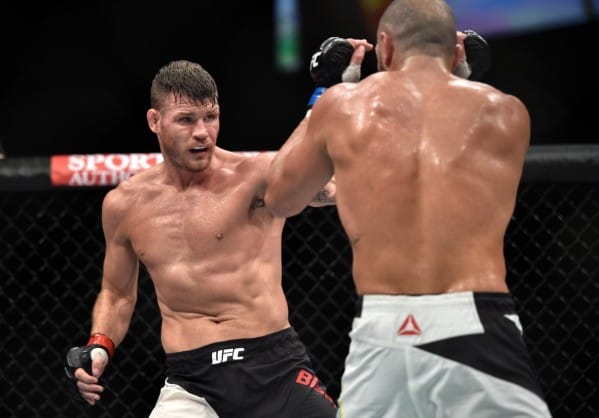 Hours after it was confirmed today (Wed., August 19, 2015) that UFC 193 was headed to Australia’s Etihad Stadium (complete with a wrong photo at first), a pivotal middleweight bout has been announced for the event.

It was confirmed this afternoon that No. 8-ranked Michael Bisping will take on No. 13 Aussie Robert Whittaker on the UFC 193 main card, which will go down on Sunday, November 15, 2015, from Melbourne.

‘The Count’ is on a small win streak after a down 2014, most recently defeating dangerous Thales Leites by decision in the main event of July 18’s UFC Fight Night 72 from his native England after edging C.B. Dollaway at April 25’s UFC 186. He’ll continue seeking his elusive 185-pound title shot against a rising young prospect in Whittaker.

The Auckland, New Zealand native will bring the momentum of a three-fight win streak, his latest win a hugely impressive first round knockout of Brad Tavares at May’s UFC Fight Night 65 from Adelaide, Australia. The fight with Bisping will be The Ultimate Fighter: The Smashes winner’s third straight bout Down Under, as he stopped Clint Hester in his middleweight debut at last November’s UFC Fight Night 55 from Sydney.

He also beat Mike “Biggie” Rhodes in his last welterweight bout from his home of Auckland, New Zealand in June of 2014.

Bisping has fought three times in Australia himself, most recently getting submitted by Luke Rockhold after defeating Jorge Rivera and losing a controversial decision to former Pride great Wanderlei Silva.

UFC 193 features a blockbuster welterweight title fight between Robbie Lawler and Carlos Condit. A heavyweight rematch between Mark Hunt and Antonio “Bigfoot” Silva, who threw down in one of the division’s greatest bouts of all-time in December 2013, was also announced last night.